Old Hill to Halesowen and Longbridge (The Halesowen Railway)

The Great Western Railway built the line from Old Hill (in Staffordshire) to Halesowen as a branch off their line from Birmingham Snow Hill to Stourbridge. The line opened on 1st March 1878 and was closed on 1st October 1969.

The line from Halesowen to Longbridge Junction (formerly known as Halesowen Junction) was opened on 10th September 1883. 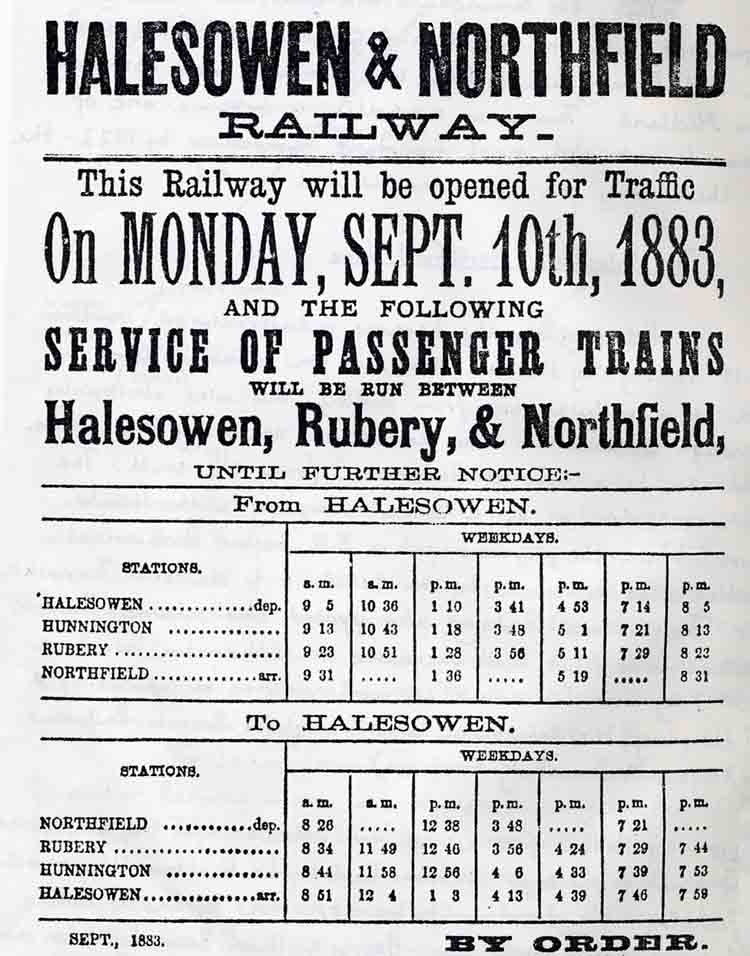 These two timetables, from the archives of the MIAC, announce the opening of the line.

There were intermediate stations at Coombes Holloway Halt (opened 1905), Halesowen, Hunnington (where there was an impressive trestle viaduct at Dowery Dell, Rubery and Longbridge (opened February 1915). Many relics remain of this railway.

G.W.R. engines including railcars tended to worked the section from Old Hill to Halesowen whilst the remainder was operated by Midland Railway engines based at Bourneville until closure of this shed after which ex G.W.R. locomotives were used.

Halesowen to Rubery closed completely on 6th January 1964 with the closure of the sidings at Hunnington.

A stone quarry at Rubery remained open until 6th July 1964, after which the section to Longbridge (west) was also closed. The impressive Dowery Dell trestle viaduct was demolished in April 1965.

Halesowen to Old Hill survived a little longer as there was still traffic from Halesowen Basin goods but this ceased on 1st October 1969.

The short section from Longbridge (west) to Longbridge Junction just to the south of the new Longbridge station closed in 2005 along with the car plant at Longbridge. Centro and Birmingham City Council made proposals in 2002 to re-open the southern end of the railway as far as Frankley but sadly these seem to be mere plans with no prospect of every being realised..

In G.W.R. days there was an impressive station board at Old Hill that read Old Hill change here for Halesowen Windmill End Branch and Dudley'.

There is a good chapter on The Halesowen Railway in 'The Great Western In The West Midlands', by P.B.Whitehouse, Oxford Publishing Co., ISBN 0 860931 87 0.

A superb set of photos of the line is available on Mark Norton superb site here: Halesowen Railway Photos