Go to content
Abstract and Landscape Railway Photographs in Worcestershire

This article is an opportunity to showcase photographs where the locomotive and train are mere incidental parts of the finished product. 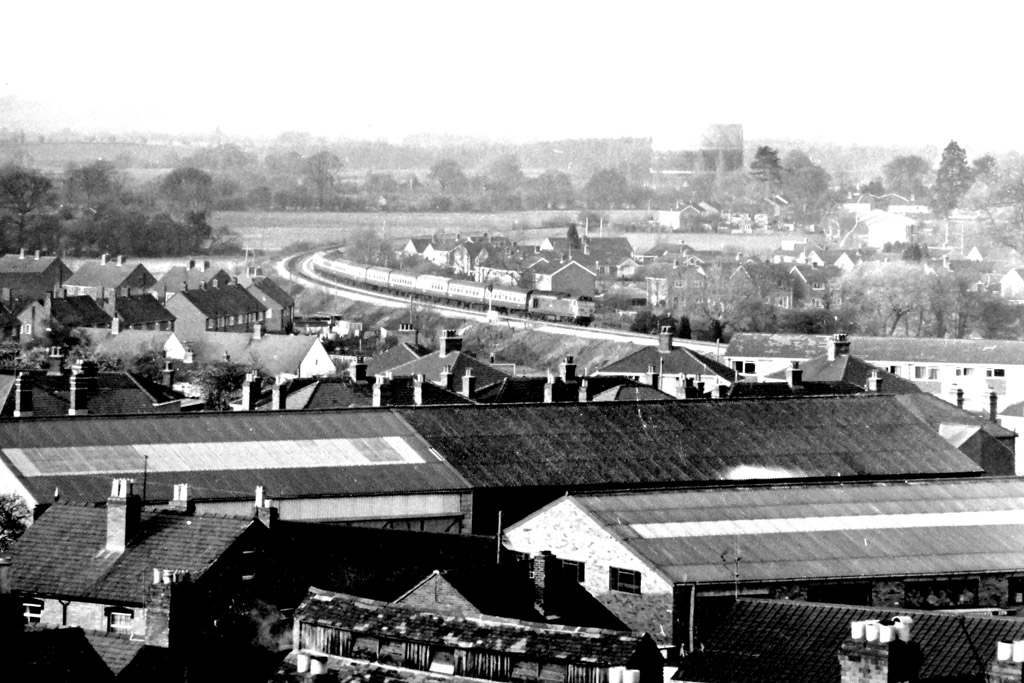 This high contrast image shows class 50 diesel locomotive No.50012 'Benbow' sweeping round the curve between Newland and Malvern Link with the afternoon express train from London Paddington to Hereford. The photographer's choice of a high angle of elevation neatly captures the atmosphere of the late 1970s. The gas holder in the background was on the site of the former Newland Gas Works. Photograph taken by Adrian Booth on 23rd April 1978. 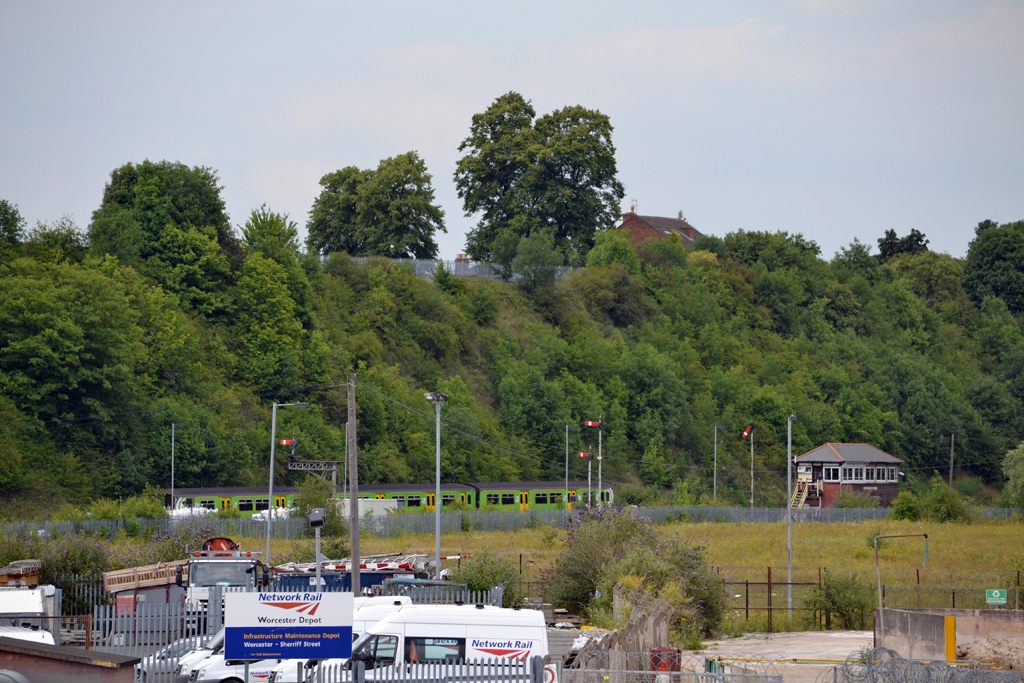 This unusual photograph was taken from the pedestrian footbridge at Worcester Shrub Hill Station and shows plenty of interest. In the foreground is Network Rail's Worcester Depot whilst the wasteland beyond is the site of the former locomotive and wagon repair works which closed in 1965. Tunnel Junction Signal Box is on the right hard side of the photograph. The unidentified class 150/1 three-car diesel multiple unit is working the 15:16 service from Worcester Foregate Street to Dorridge. The railings at the top of the photograph are installed along the famous 'Railway Walk'. Photograph taken by Andrew Smith on Saturday 2nd July 2011. 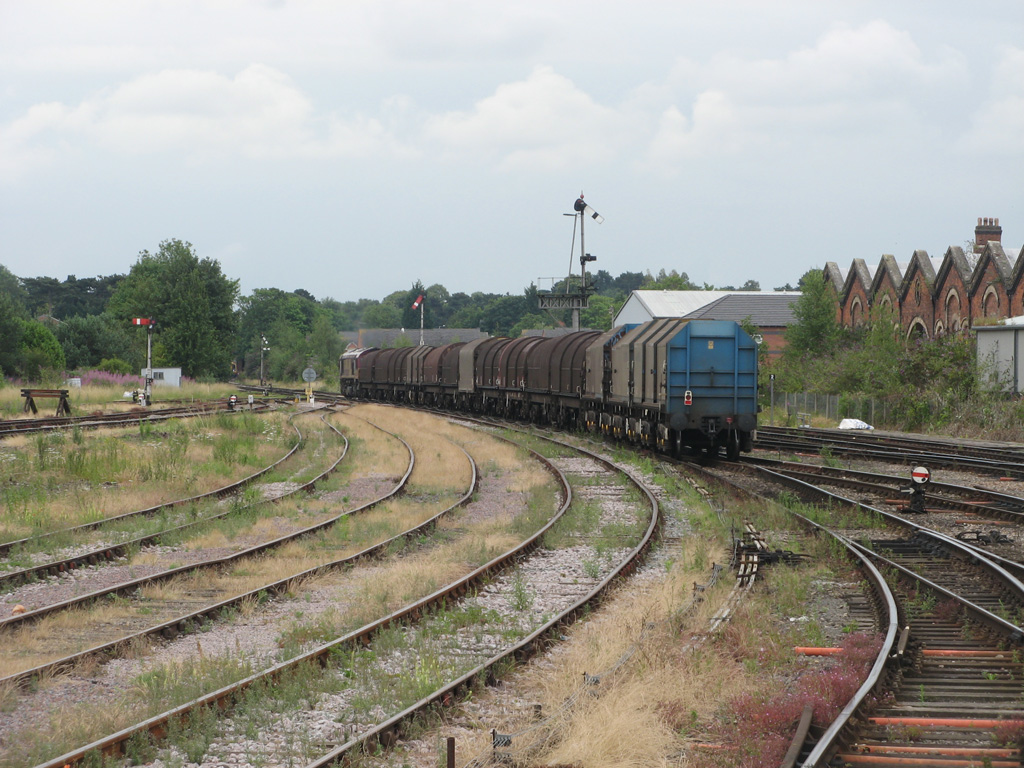 EWS livery class 66/0 diesel locomotive No.66098 has charge of train code No.6V05, the morning Round Oak to Margam empty covered vans. The use of a 200mm lens has neatly highlighted the desolate state of the empty yards at Worcester. The train had been held in Worcester Shrub Hill Station whilst the 09:54 First Great Western service from Great Malvern to London Paddington cleared the section. The signals are set for the approach of the 07:32 First Great Western service from Warminster to Great Malvern, which was operated by South West Trains class 158 two-car diesel multiple unit No.158885, the front of which can just be seen. Photograph taken by Andrew Smith on Wednesday 20th July 2011.

Between Croome and Abbotswood the road on the west side of the former Birmingham & Gloucester Railway an gap in the hedge allows this distant view of the line. This is a difficult spot because the trains are inaudible and they give only a few seconds warning. The best conditions would be a sunny afternoon with bare trees and lying snow, or perhaps a clear dull day with a southbound steam special. The photograph of an unidentified class 170 two-car diesel multiple on the 12:08 Cross Country Trains service from Nottingham to Cardiff service was taken by Robert Pritchard on Thursday 13th September 2012.

The photographer chose a suitably grainy colour print film for this photograph of a class 47 diesel locomotive with mostly Mark 2 carriages heading towards Bristol. Photograph taken by Andrew Smith in May 1981. 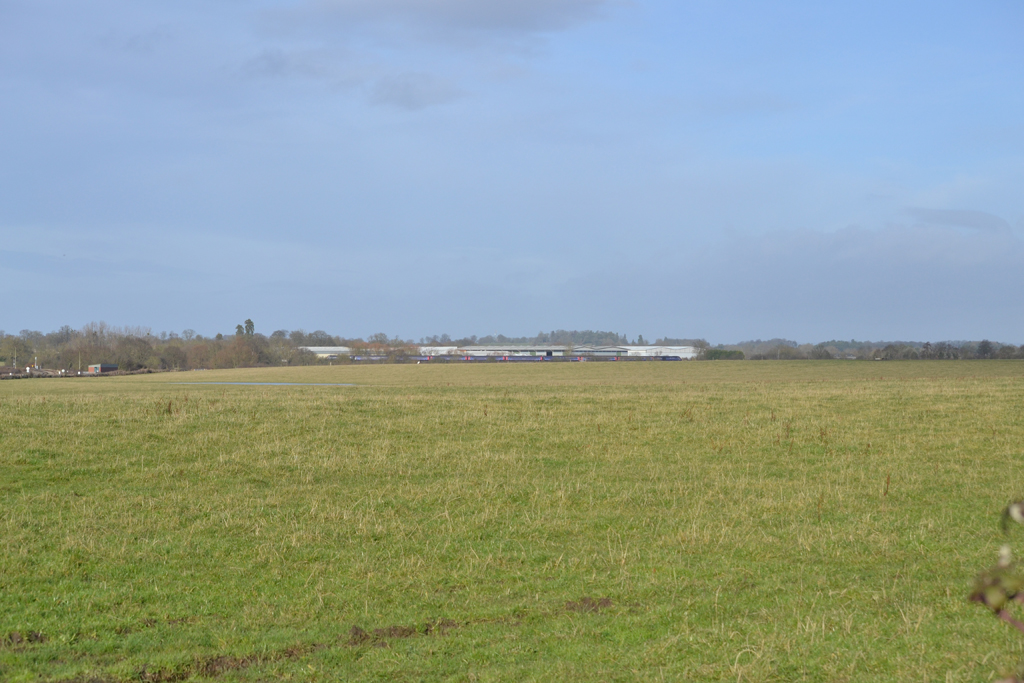 Viewed from the ex-Birmingham and Gloucester Railway bridge at Abbotswood Junction, this photograph shows a First Great Western livery 'HST 125' heading towards Worcester Shrub Hill on the ex-Oxford, Worcester & Wolverhampton line from Oxford. The train is the 10:22 service from London Paddington to Hereford (train code 1W02). This is the last and best in a series of photographs of this train at this location. From another photograph in the sequence the leading class 43 power can readily be identified by its distinctive nameplate as being one of those named 'FIRST' (Nos.43004 and 43009). The rear power car also carries a name but it was necessary to await the return working of this train, the 15:14 from Hereford (train code 1P65) before, in the gathering gloom, the identity of the class 43s could be identified as Nos.43004 'FIRST' and 43053 'University of Worcester'. Photograph taken by Andrew Smith on 17th December 2012. 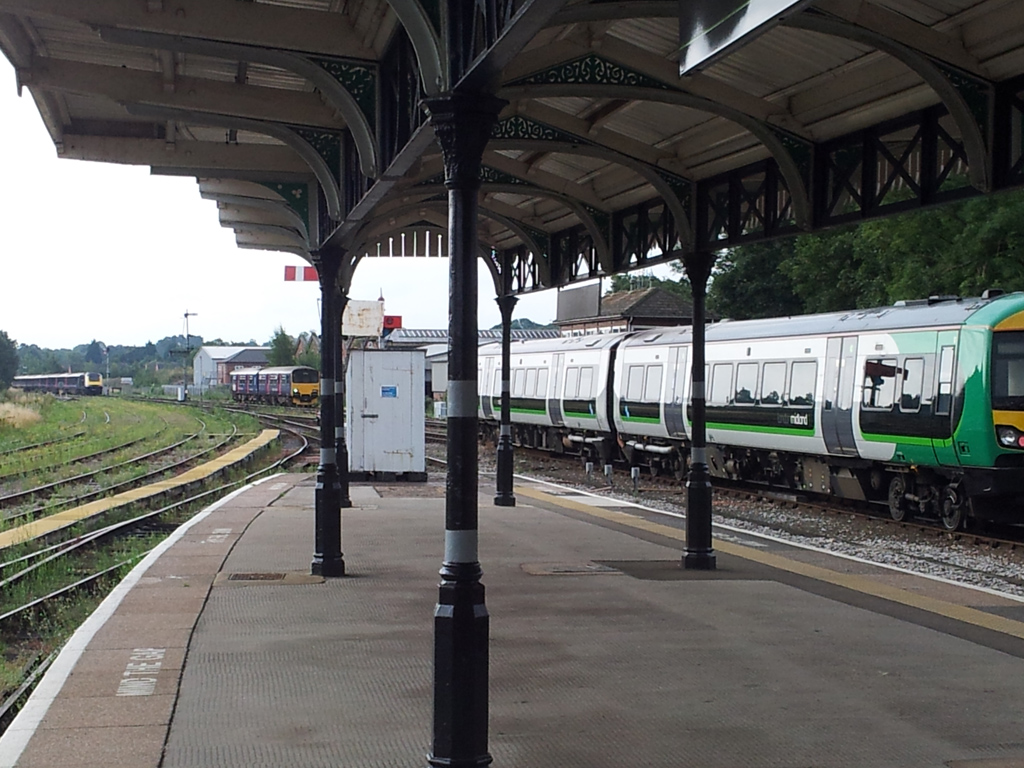 This fascinating photograph shows much of interest to the railway modeller, including the base of the pillars supporting the roof at Worcester Shrub Hill. Disappearing from view on the left hand side is the Saturdays only 08:43 First Great Western service from Great Malvern to London Paddington with class 43 diesel locomotive No.43078 at the rear of the train (train code No.1P37). In the siding, awaiting access the platform is two-car class 150/1 diesel multiple unit No.150103 with the 09:08 First Great Western service from Worcester Shrub Hill to Westbury (train code No.2F97) whilst the centre line contains two-car class 172 diesel multiple unit No.172212 with the empty stock for the 09:47 Worcester Shrub Hill to Stratford-upon-Avon service (train code No.2S26). Photograph taken by Andrew Smith on Saturday 24th August 2013.