Seventy-six (76) 'Warship' class diesels were built at BR's Swindon workshops (class 42s) and by the North British Co Ltd in Glasgow (the D6xx's and all of class 43) during the period from 1958 to 1962. Subsequently BR decided to adopt diesel electric type locomotives as standard and as a result the 'Warship' were all withdrawn from service after a very short life. Five of the 'Warships' (D600 to D604) formed a class on their own and as they and the class 42s were not regularly seen in Worcestershire they are not covered in this article.

Towards the end of their working life (from Spring 1968) some of the class 43 'Warships' took over, from 'Hymek class 35's and class 47 locomotives, the operation of the services from London Paddington to Worcester and Hereford. The last class 42 was withdrawn in December 1972 and the last class 43 in October 1971. Phil Bullock notes that in addition to the Paddington's another regular duty was train headcode '5B79' vans from Bristol Malago Vale or Temple Meads to Worcester Shrub Hill. 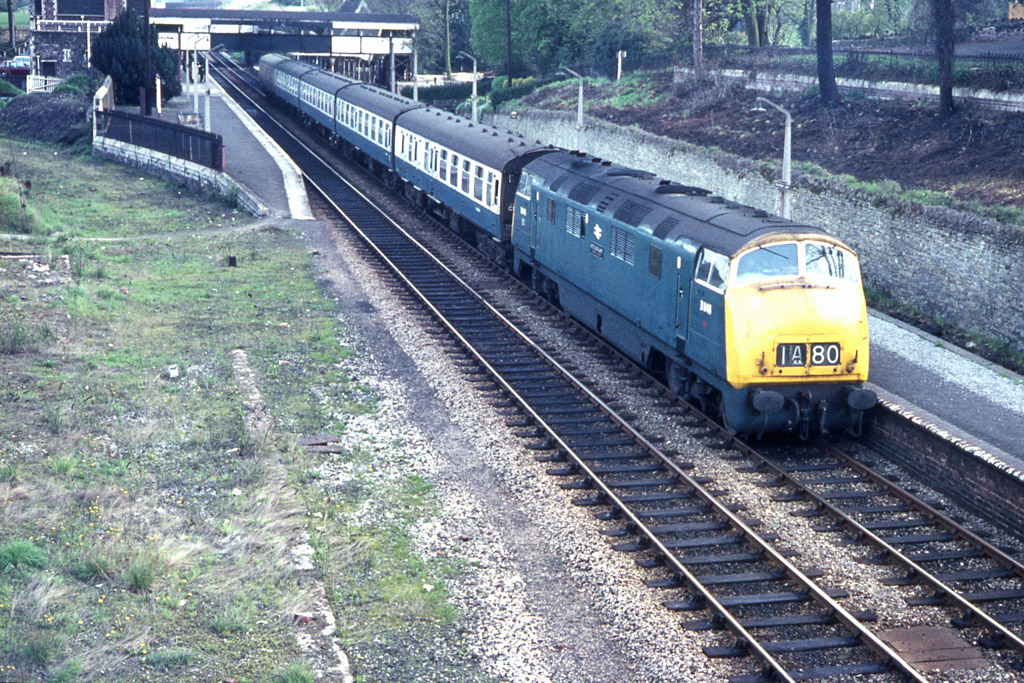 On 30th April 1969 'Warship' class 43 diesel hydraulic locomotive No.D846 'Steadfast' had charge of a Hereford to London Paddington express and was photographed by Robert Pritchard at Malvern Link Station. The locomotives took its name H.M.S.Steadfast which was a Minesweeper acquired from the USA under the lease/lend scheme during World War 2. It survived the war and returned to the USA in 1946. There had also been a World War 1 era Destroyer with the same name.

The vacant land to the left hand side of the photograph shows part of the former goods sidings and includes part of the brick building that had recently been demolished. The siding to the right of the locomotive was subsequently filled in. 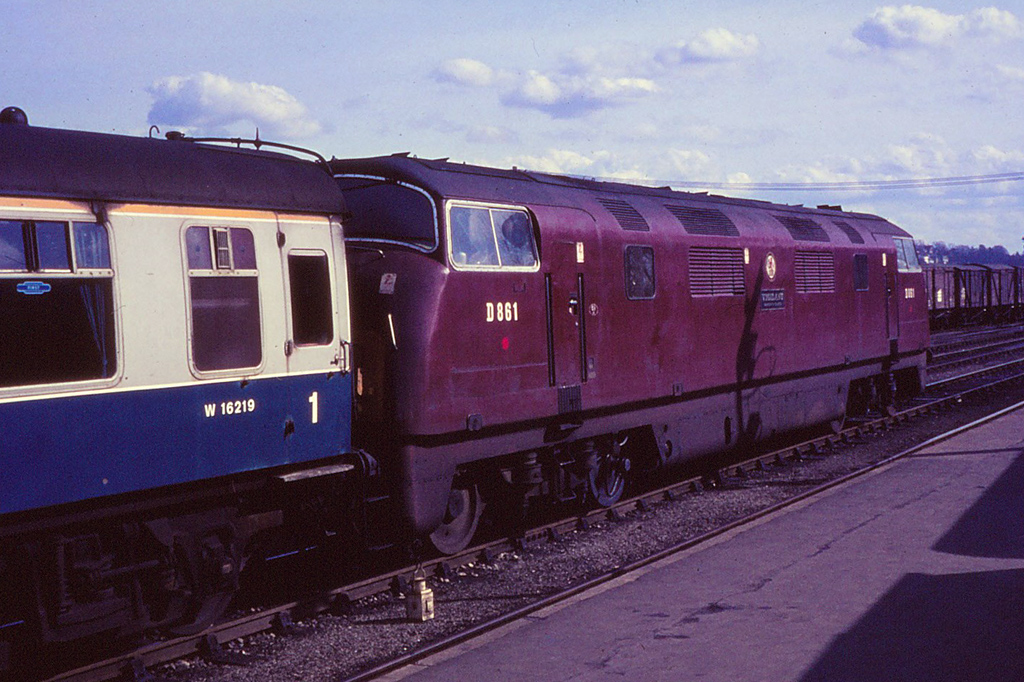 In the late afternoon sun, maroon livery Class 43 diesel hydraulic locomotive No.D861 'Vigilant' is in the middle road at Worcester Shrub Hill with the empty stock for a London Paddington express train. It was photographed by Pete Wilcox on 26th March 1968. Photograph taken by Pete Wilcox. H.M.S. Vigilant is a name used many times by the Royal Navy and most recently for a nuclear powered submarine.

Pete Wilcox has supplied a list of 'Warships' that he saw at Worcester during the period from 19th February 1968 to 31st May 1969 as follows: 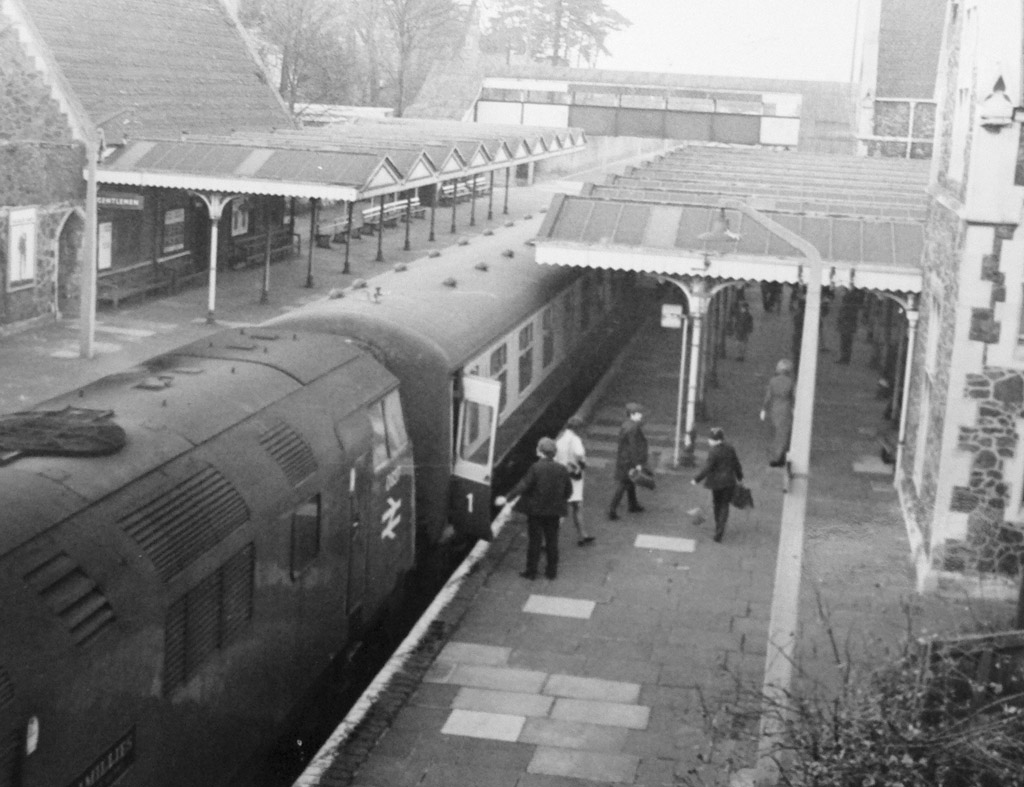 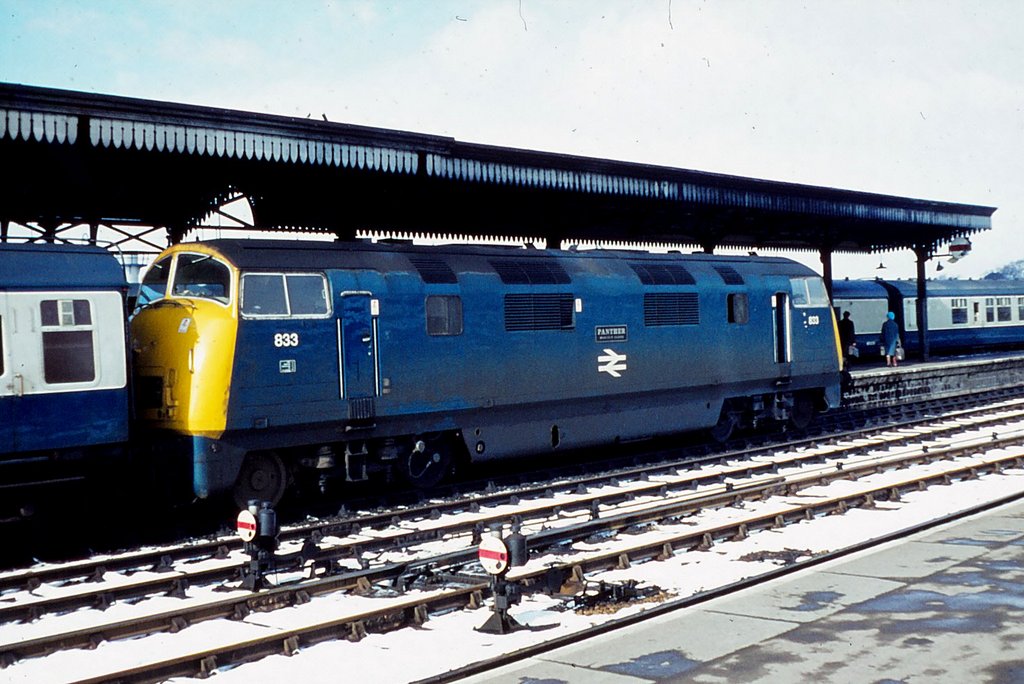 Pete Wilcox took this photograph of No.D833 'Panther' at Worcester Shrub Hill on a very snowy 7th March 1970; the locomotive had presumably worked the 09.15 from London Paddington as it returned there at 14.15..

The MIAC is delighted to be able to offer for download a file of Warship diesel hydraulic locomotive observations. The notes below were provided by Martin Street who has made the file available. We hope that if you find this information of interest and can add/amend anything that you contact Martin on the email address below :

"I am always interested in new information on the NBL Warship workings on the Cotswold line in the 68-71 period. I attach the sum total of the bits and pieces I have picked up over the years if you wish to use this for the website then please feel free to do so. What I would request is that it is accompanied by a request for any further information and photographs of these fine loco's working on the line. I am happy for my email address to accompany any request and I am also willing to enter into correspondence with anyone who has questions or recollections.

The Warships were my own introduction into the hobby as a 10 year old lad in Evesham in 1968.

You can email Martin on m.j.street@btinternet.com.