This railway ticket for a journey from Dudley to Dudley Port was issued on 24th August 1963.

The Black Country town of Dudley was an enclave of Worcestershire that was enclosed by Staffordshire. In Dudley became part of the West Midlands County Council area and since 1986 has been a Borough. 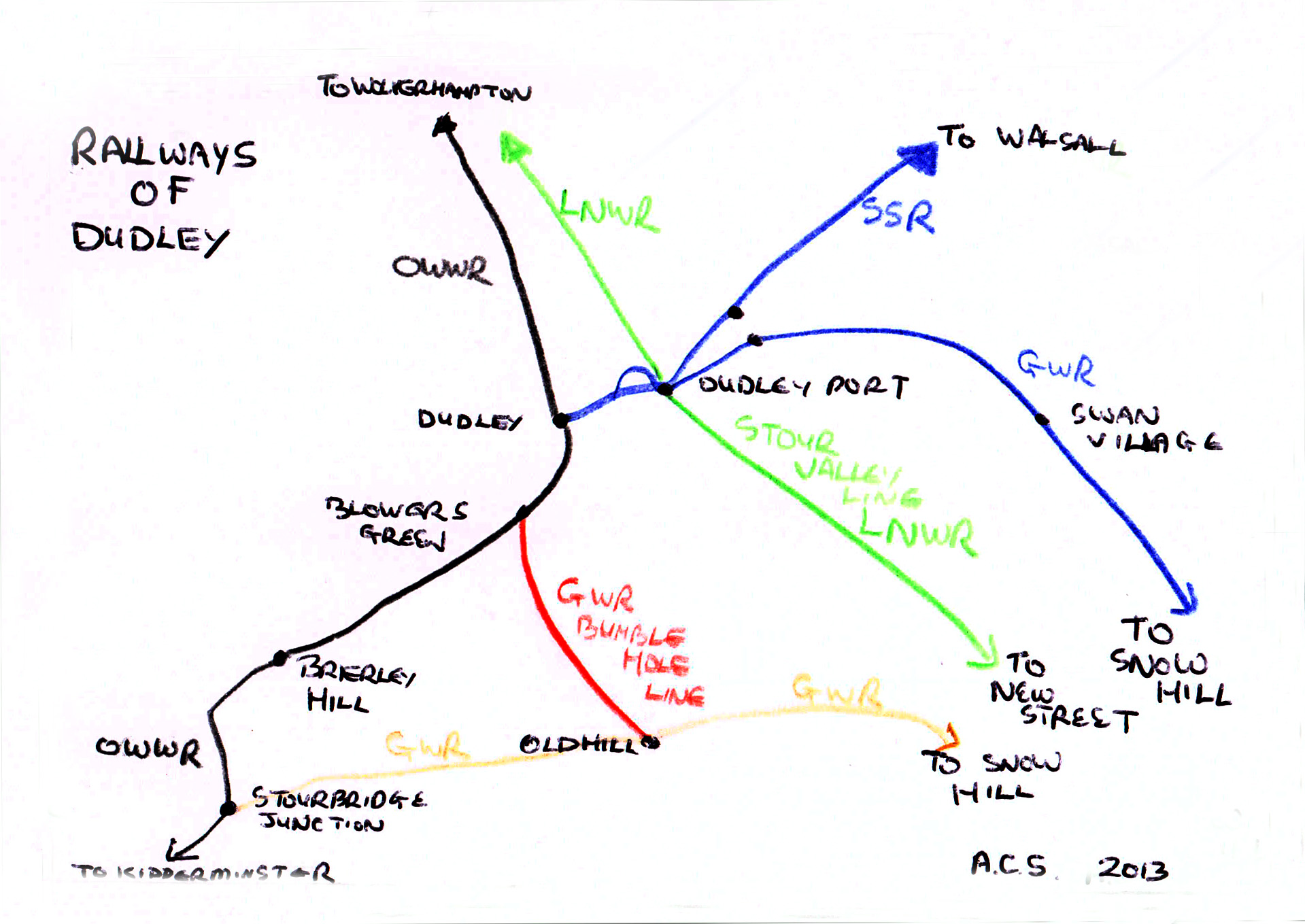 Dudley was the only major station on the Oxford, Wolverhampton and Worcester Railway line from Stourbridge Junction to Priestfield and Wolverhampton. The line between Stourbridge and Dudley opened for freight traffic on 16th November 1851 and for passengers on 20th December 1852 and in 1853 the line was extended north to Priestfield (where it later connected with the GWR line from Snow Hill). The OWWR became part of the West Midland Railway on 1st July 1860 and the Great Western Railway on 1st August 1863. Dudley was also the terminus of the South Staffordshire Railway line from Walsall (opened 1st March 1850) which became part of the LNWR in 1867 and thence the station was in joint ownership of the LNWR & GWR. Later the LNWR part was taken over by the LMSR. The station consisted of separate island platforms for the two companies. It was also possible to reach Dudley from Birmingham Snow Hill by using a spur at Swan Village off the line to Wolverhampton Low Level or via the Bumble Hole line from Old Hill to Blowers Green. 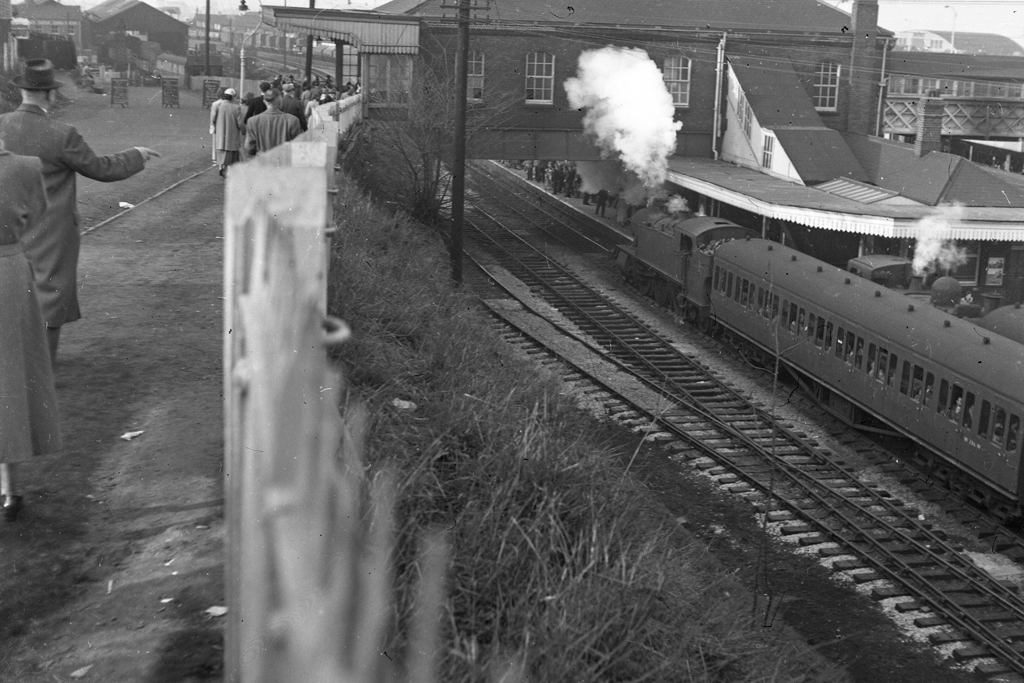 This fascinating photograph shows the former OWWR platforms with ex-GWR 2-6-2 tank engine No.5199 of Stourbridge and non-corridor stock running in with a train from the south. A large number of people are walking down Station Drive presumably returning to the station to catch a train home after spending the day at the nearby zoo or town. At the top left is a three road ex-GWR goods shed with the Wolverhampton bound lines curving away behind. The photograph was taken by Douglas Clayton on Monday 2nd April 1956 (Easter Monday). The MIAC is grateful to the Industrial Railway Society for permission to reproduce the photograph and for the following which were also taken by Douglas Clayton. High resolution copies of any of these photographs can be purchased by emailing your requirements to sales@irsociety.co.uk 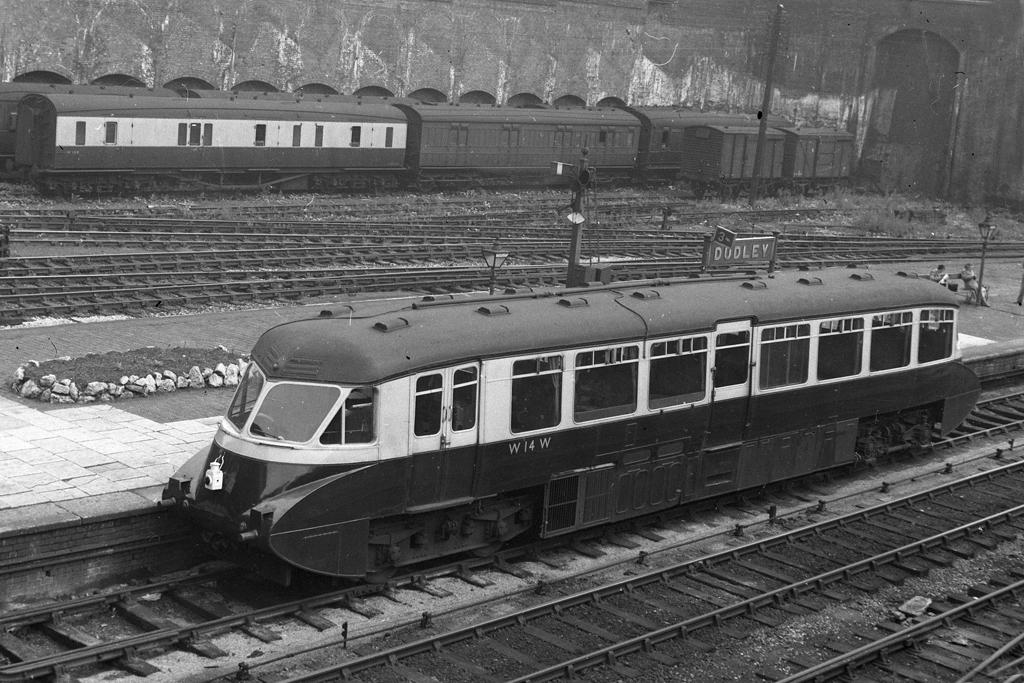 Stourbridge based ex-GWR Railcar No.W14W was built in 1936 and is seen standing in the bay platform at the south end of the station. Photograph taken on 14th June 1952. 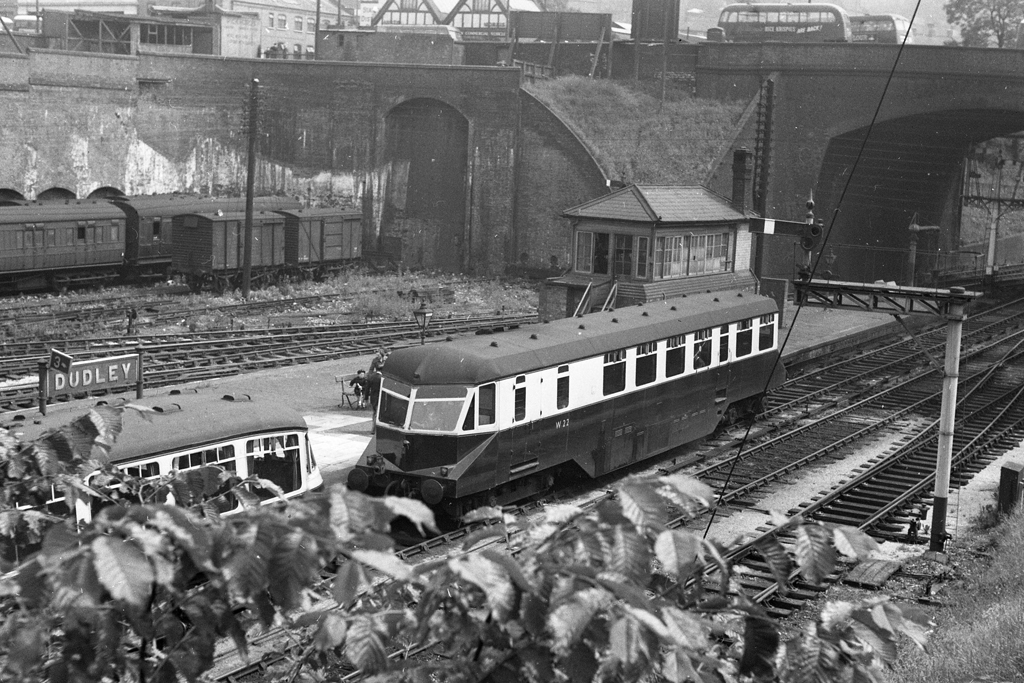 Dudley South Signal Box can be seen behind this photograph of ex-GWR railcar No.W22. The Platform 3 sign which appears to be suspended in mid air is attached to the station name board. In the background, a pair of 'Midland Red' double decker buses are crossing the Birmingham Road bridge. Photograph taken on 14th June 1952. 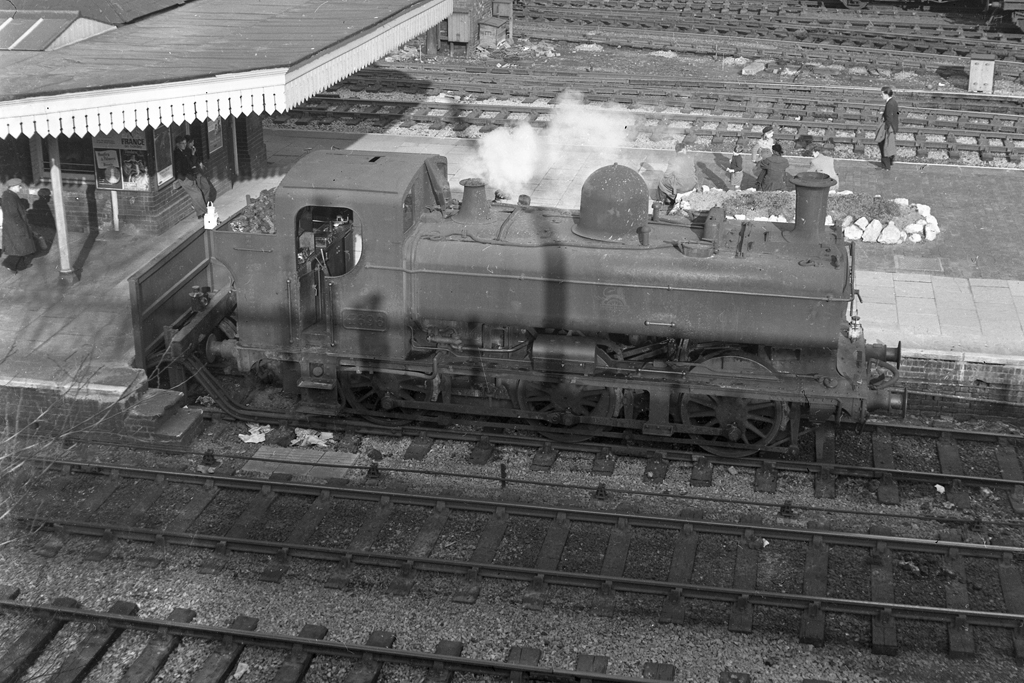 This superb photograph shows 5700 class 0-6-0 pannier tank No.4696 of Stourbridge Shed standing at the buffer stops in the bay platform at Dudley Station on 2nd April 1956. The person on the platform on the left hand side of the photograph appears to be avidly reading the posters and perhaps contemplating buying Huntley & Palmers biscuits or taking a holiday in France whilst one of the two boys leaning against the window is eating an ice cream. 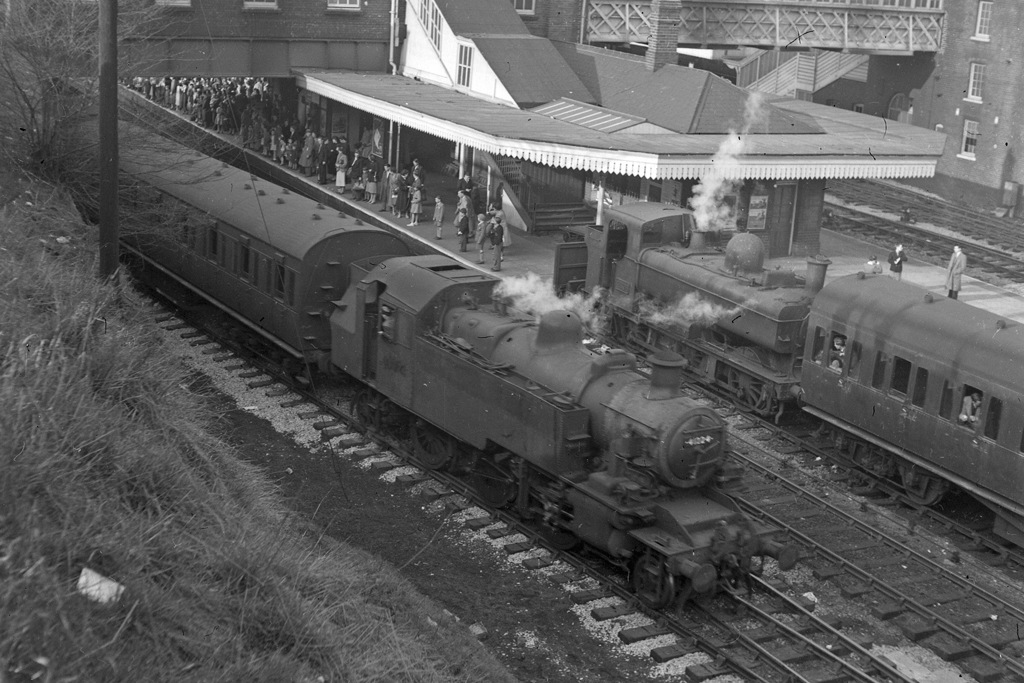 This photograph bears close examination as a fine piece of social history. The photograph was taken on Monday 2nd April 1956 (Easter Monday) and was one of the few public holidays when the working class could dress up in their best clothes (usually school uniform in the case of children) and have a day out. Fortunately the sun shone that day as the families made their way home after perhaps visiting the nearby zoo. The 5700 class pannier tank in the bay platform is again No.4696 but this time attached to a train of carriages as Ivatt 2MT 2-6-2 tank engine No.41224 of Walsall Shed is shunting a train of empty stock in the sidings alongside Station Drive, having presumably brought a train of visitors down the ex-LNWR line. 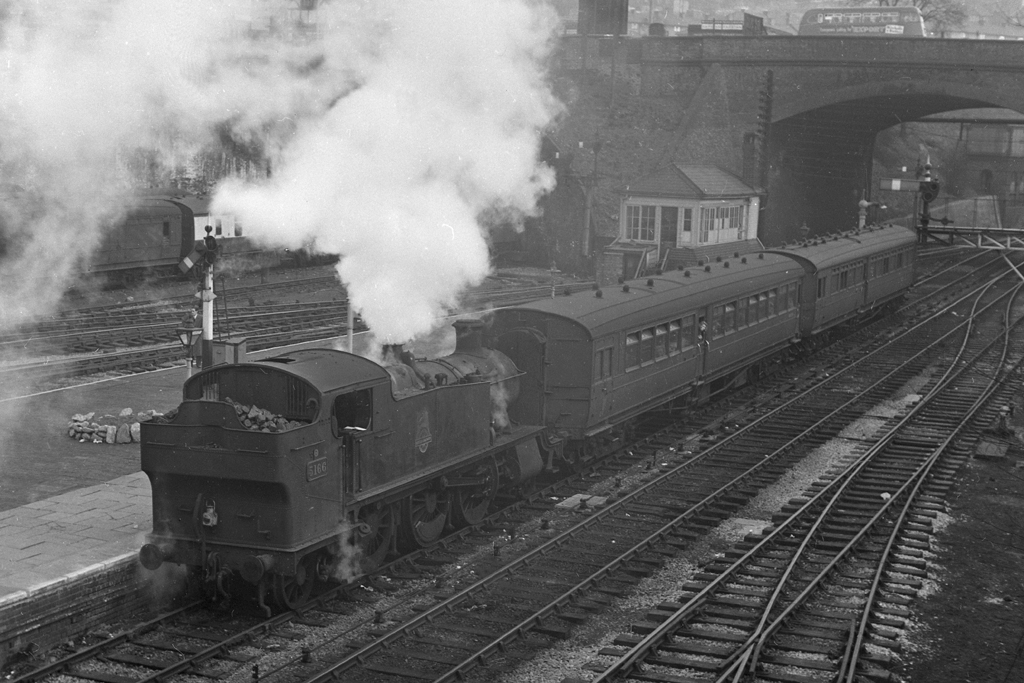 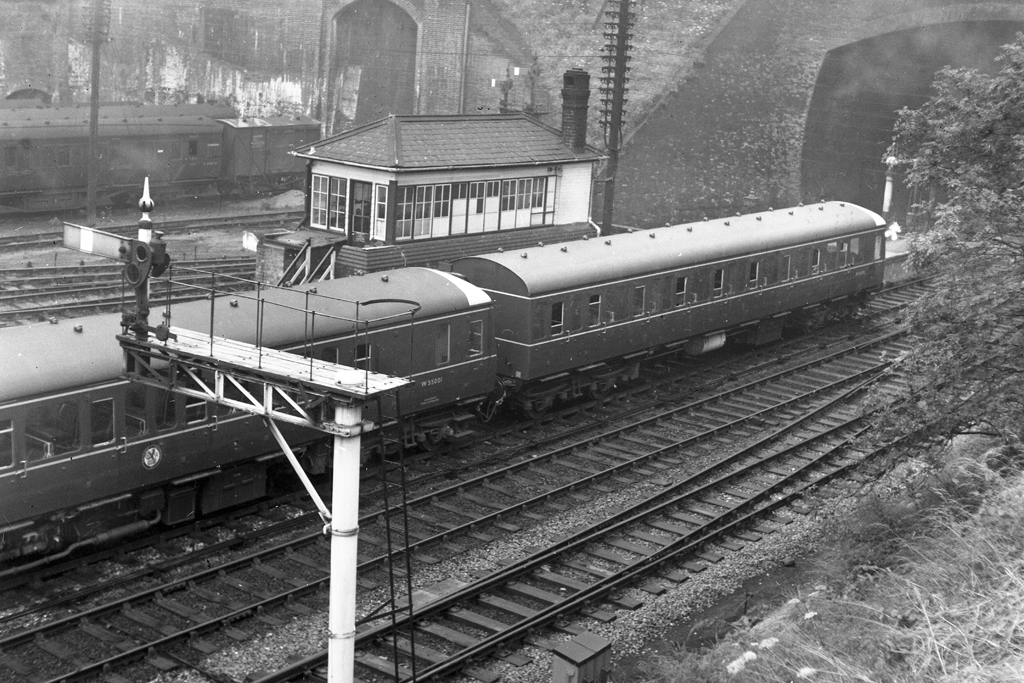 The Stourbridge to Wolverhampton passenger service ceased on 29th June 1962, Dudley to Old Hill on 13th June 1964 and Dudley to Walsall closed to passengers on 6th July 1964 but the station lingered on for another couple of years for freight and parcels until it was demolished in 1967 and a new Freightliner terminal built on the site but this too closed on 29th September 1986. The last freight service headed by class 47 diesel locomotive No,47238 'Bescot Yard', carrying the headboard 'The Dudley Dasher Memorial Special' passed through the site on 19th March 1993 after which the trackbed was mothballed. The following three photographs show the site around 1989. 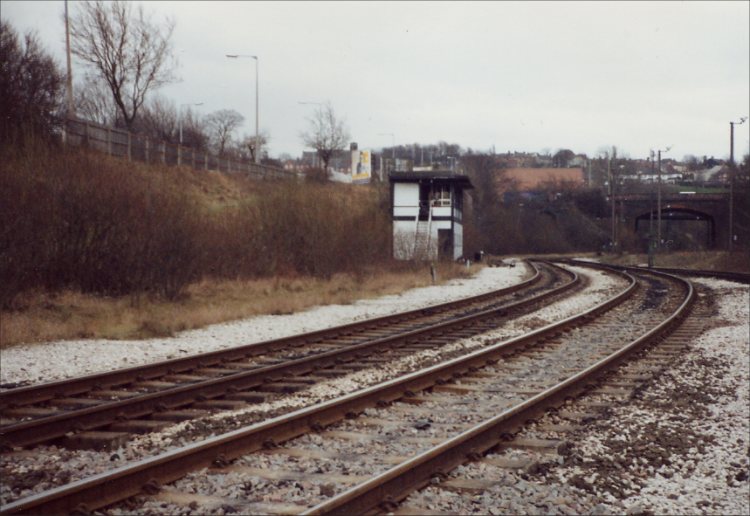 This is the site of Dudley Station looking south. The signal box was opened on 16th July 1967 and closed on 5th June 1988. 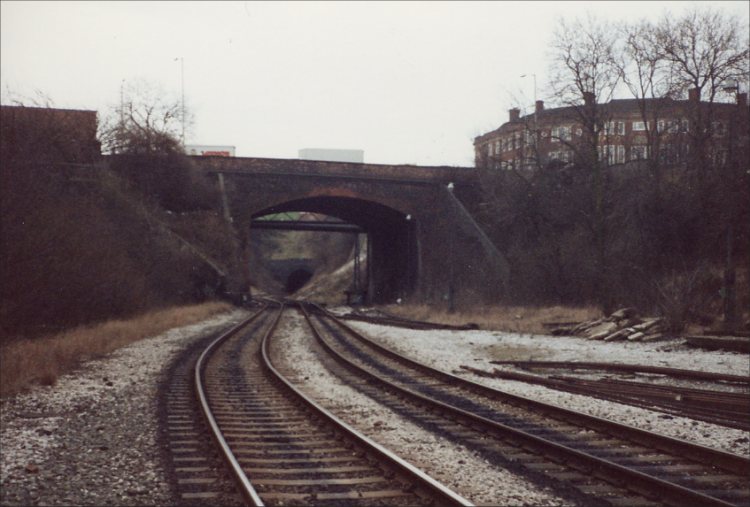 This photograph is looking south towards the tunnel. The impressive building on the right hand side is the Station Hotel. 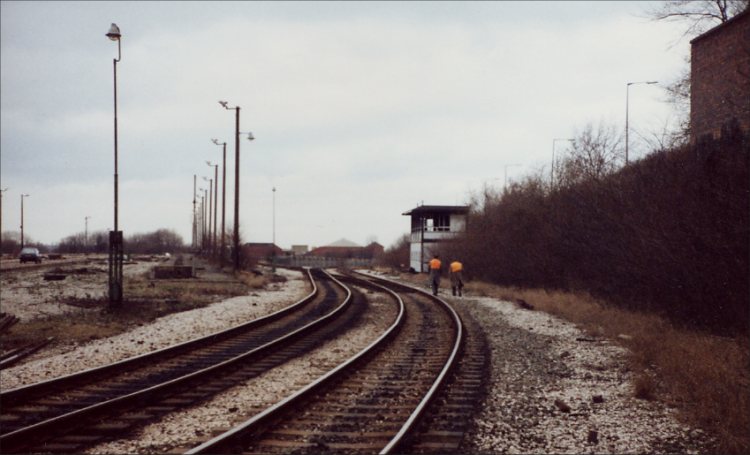 This photograph is looking north towards the Black Country Museum with the site of the Freightliner terminal on the left hand side. All three photographs above were taken by Colin Robey around 1989.

This section of the line is now mothballed as can be seen in the following two photographs taken by Andy Doherty in 2003 . 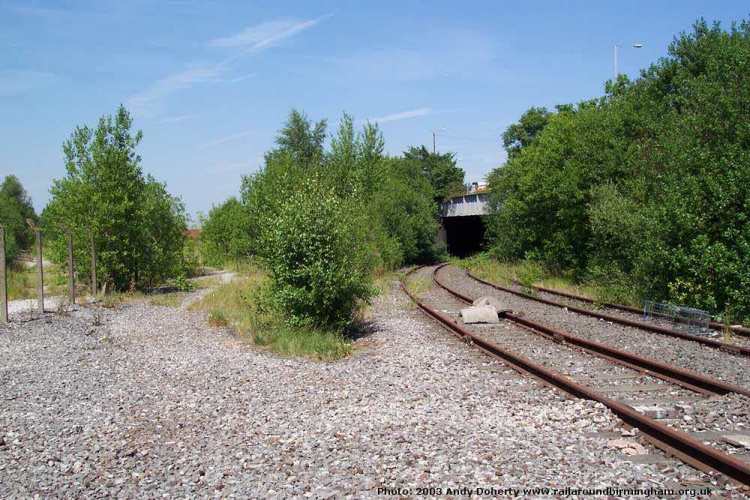 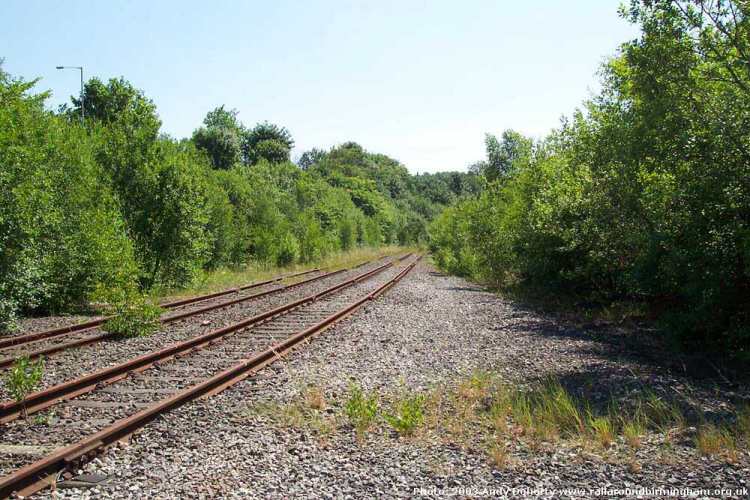 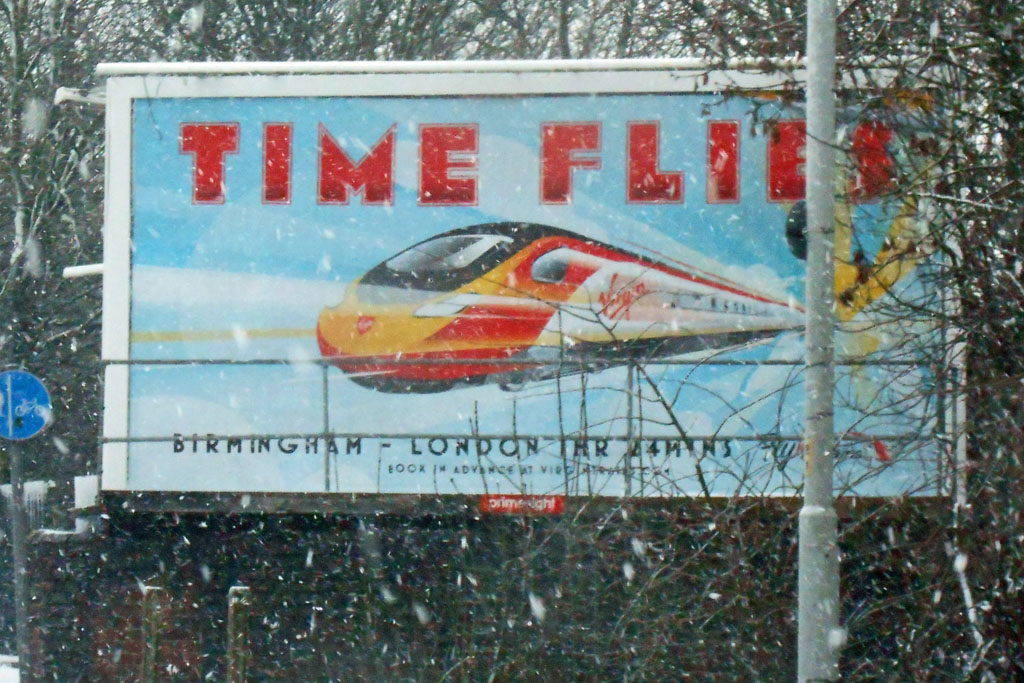 Somewhat adding insult to injury was this advert photographed near the site of the closed Dudley Station. Photograph taken by Andrew Smith on 22nd March 2013.