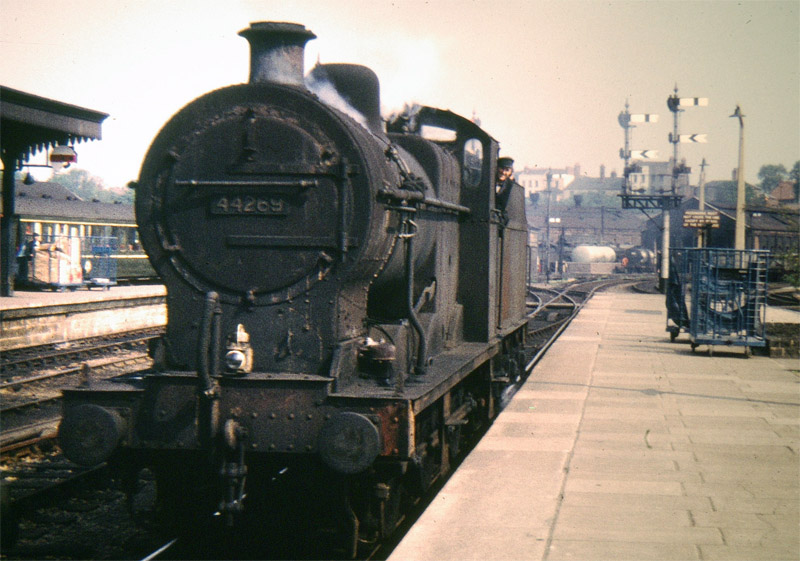 Ex-LMSR No.44269 of Bristol Barrow Hill shed is running light engine through Worcester Shrub Hill station towards Gloucester. Note the green livery diesel multiple unit in the bay platform and some locomotives on the shed in the background. 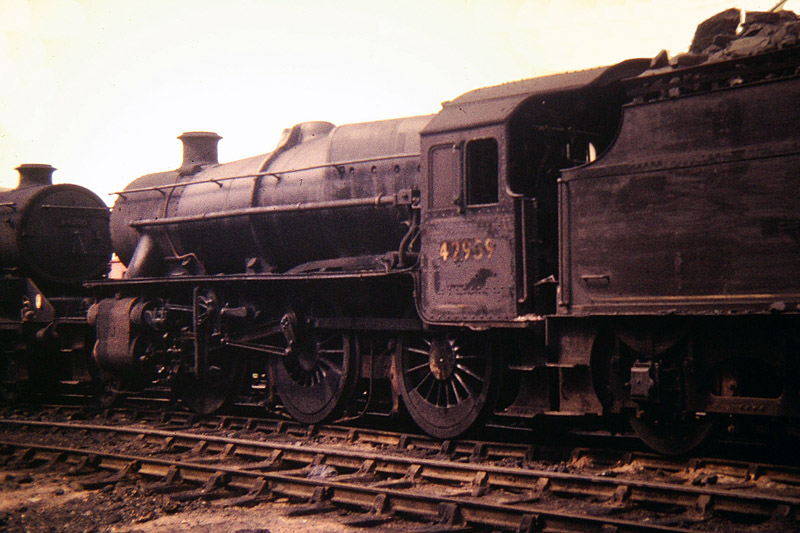 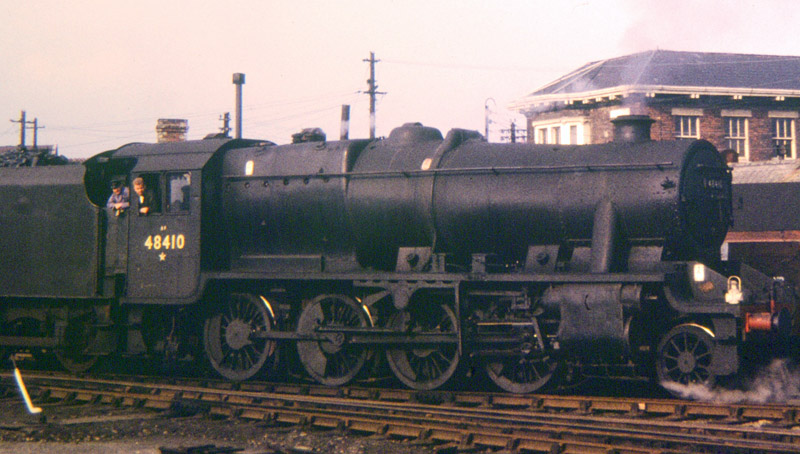 This is ex-LMSR Stanier designed class 8F 2-8-0 (actually built at Swindon in 1943) No.48410 of Stourbridge shed. Phil Male comments that: "In 1965 I was fireman on this very loco No 48410. We were working what was known as the Cleobury Ballast. The single line track from Bewdley through the Wyre Forest to Cleobury Mortimer had been closed for some years, and the track was being lifted. We went light engine tender first past Wyre Forest station. About a mile further on we came to the wagons that had been left the previous day for the contractors to stack the track onto. There was no brakevan at the back so guard traveled in cab with me and the driver back to Bewdley. I let the guard have my seat on the RHS of cab. Unfortunately on the return journey we collided with a covered army truck at a forest crossing. The guard saw it coming cus he was was looking directly out cabside, whereas driver did not because we tacking a right hand curve so drivers view of the army truck was restricted by the loco. The brand new army truck had bowled over a number of times after being struck by the loco, and it was a complete write off with only 500 miles on the clock. It's a good job their were no army personal in the back of the covered truck, otherwise it could have been a high death toll. The driver of the truck was led away before we had time to walk back to where the incident happened. Weeks later I still remember seeing traces of army green paint on the coupling rod, cylinder and buffer beam as shown in photograph". 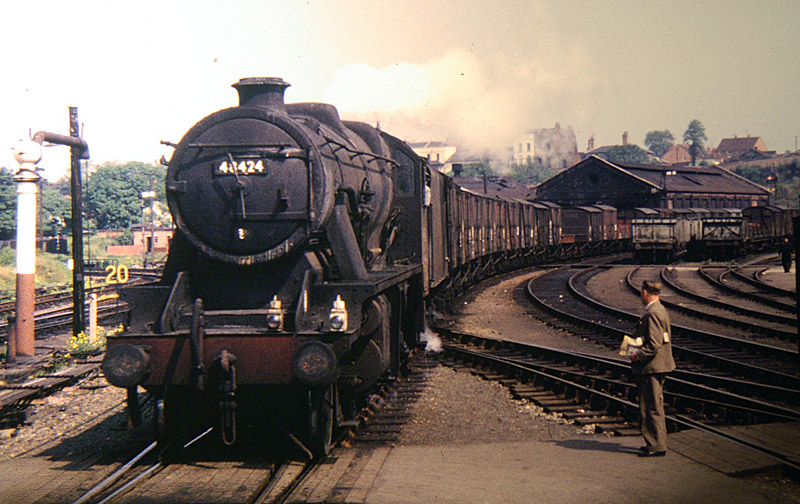 From the same batch of Swindon built Stanier class 8F locomotives as No.48410 above and also allocated to Stourbridge shed this is No.48424 entering Worcester Shrub Hill station with a lengthy mixed freight train. The onlooker waiting to cross the tracks is Don Green. 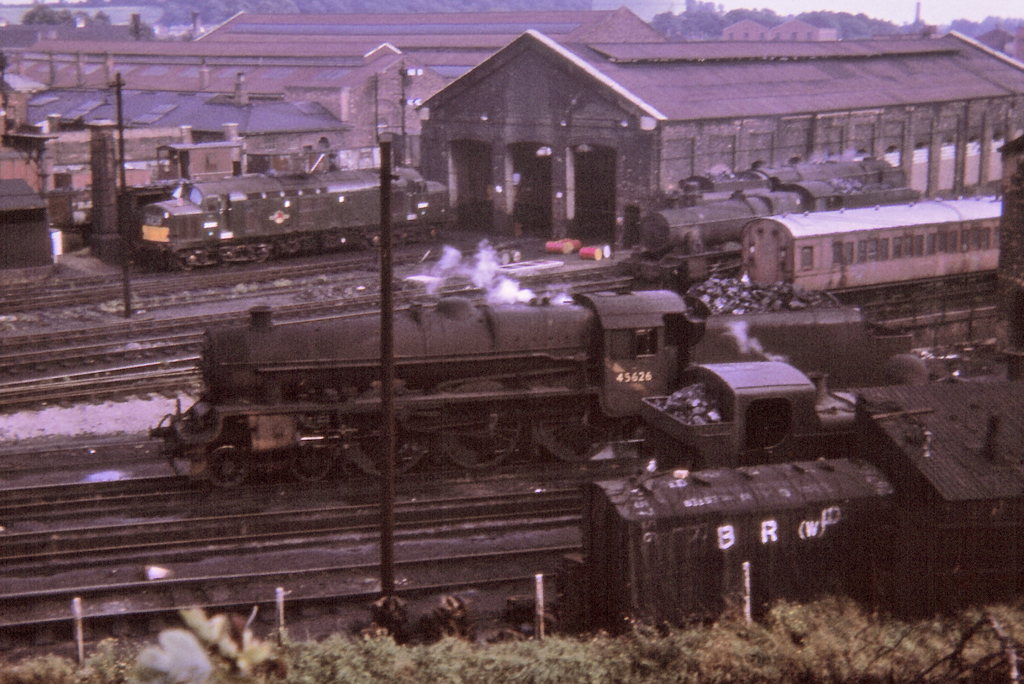 This fascinating photograph which was taken on 25th August 1965 features ex-LMSR 'Jubilee' class 4-6-0 steam locomotive No.45626 'Seychelles' of Leeds Holbeck Shed. No.45626 did not remain in service for much longer being withdrawn in October 1965. The photograph shows the depot in the transitional stage, with diesels occupying the running shed. The class 37 diesel locomotive is No.D6941, one of the unofficial allocation of Lickey Incline bankers. On the lines between the two sheds are Oxford allocated ex-GWR 'Hall' class 4-6-0 No.7909 'Heveningham Hall' and the highest numbered BR steam locomotive Standard class 9F 2-10-0 No.92250 from Severn Tunnel Junction shed and the one member of the class fitted with a Giesl ejector. An 0-6-0 'Pannier' tank is also visible in the foreground.

Stephen Mourton comments “I can add a little bit of information about No.45626 as I saw it light engine heading north through Cheltenham Lansdown Station just after 1pm that day. This was the last 'Jubilee' I saw at Cheltenham in BR steam days and indeed was the first one I had seen since the end of January 1965. It would be fascinating to know what train it had worked down and what train it worked north from Worcester.”