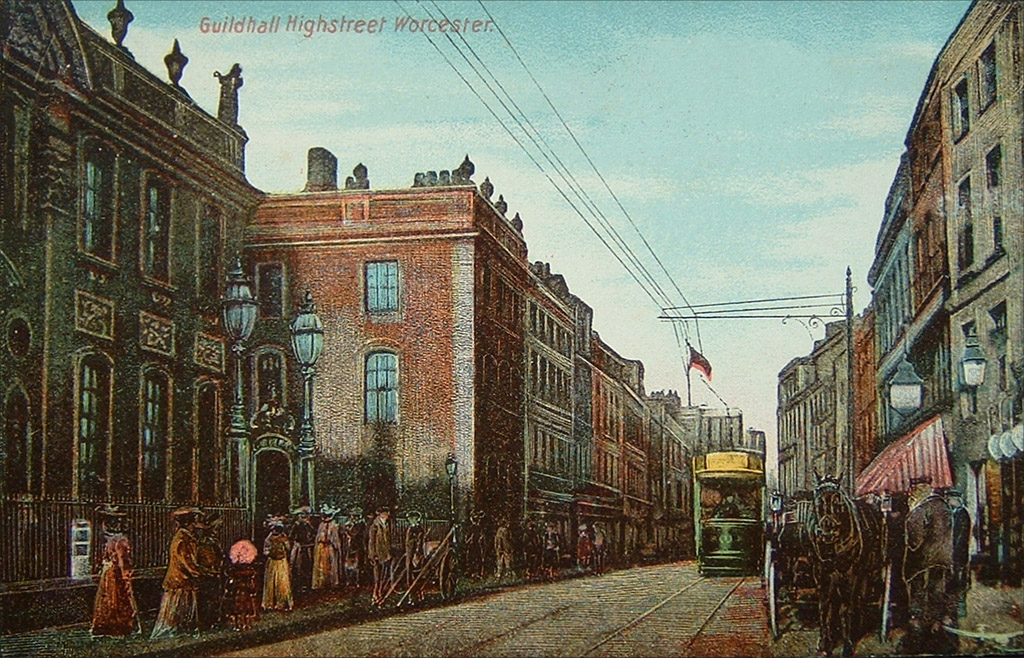 At first thoughts the Guildhall in Worcester's High Street might not appear to be a place holding anything of railway interest, but first impressions can be deceptive and this fine old building is a real treasure trove for the railway enthusiast.

Amongst items on display the following are normally to be found:

A fine portrait of Alderman Walter Holland (1831-1888) by the artist J. Haynes Williams. Walter Holland had been an employee of the Oxford Worcester & Wolverhampton Railway prior to that railway being taken over by the Great Western Railway in 1863. He then formed a partnership with Thomas Clunes (who owned the Vulcan Ironworks in Worcester) and John McKenzie to form McKenzie, Clunes & Holland (later McKenzie & Holland). McKenzie & Holland expanded to become the foremost manufacturer of signalling equipment in the UK. Walter Holland became a J.P. for the City and County and was Mayor of Worcester from 1878 until 1881 and again in 1887. See the entry on McKenzie & Holland Ltd for more information.

A painting by E. Aldis of Alexander Clunes Sherriff (1816-1875). Alexander Clunes Sherriff was one of the most important Victorians in Worcester. He was already well established before being brought to Worcester in the 1850s to revitalise the fortunes of the Oxford Worcester & Wolverhampton Railway (OW&WR) (by this time the railway was so run down its customers named it the "Old Worse & Worse"). Under Sheriff's leadership things improved so much that by 1863 it was sold to the Great Western Railway. Sheriff then formed the Worcester Engine Works Co Ltd with amongst others Walter Holland. Sheriff went on to become the M.P. for Worcester, Chairman of Worcester Porcelain Co, a director of several railways in London and of a Russian steelworks. See also the entry for Worcester Engine Works. The Secretary of the Worcester Engine Works Co Ltd was Harry Day and his portrait is also in the Guildhall.

Philip Burne-Jones who was the son of renowned pre-raphaelite artist Edward Burne-Jones painted the composer Sir Edward Elgar and this painting is on display in the Guildhall. Several locomotives have carried the name of this famous composer of music starting with the "Castle" class 4-6-0 steam locomotive No.7005 which had originally carried the name "Lamphey Castle" before being re-named at a ceremony at Worcester. The nameplate from this engine is in the Elgar birthplace Museum at Lower Broadheath. In the diesel era, Class 50 diesel locomotive No.50007 also carried the name "Sir Edward Elgar". The rather more impersonal name "Elgar" is carried by ex BR Class 92 Co-Co electric locomotive No.92009. Elgar was born at Lower Broadheath in 1857 and went on to become the foremost composer of English music in the early years of the 20th century. He died in 1934 and is buried in Malvern. Amongst his most popular works are "Enigma Variations", "The Dream of Gerontius" and the "Pomp & Circumstance" marches.

There is also a portrait of William Lewis (1792-1868), a one time director of the Oxford Worcester & Wolverhampton Railway.

Other items to look our for are a bust of Sir Edward Elgar, a 1887 Jubilee Plate in the name of Walter Holland, the Mayor's Chain of Office donated by Alexander Clunes Sheriff, and an Underwood & Co centenary plate. A recent addition is a plague commemorating the naming of class 37 locomotive No.37114 'City of Worcester' on 2nd May 1993.

Portraits and Paintings at the Guildhall (City of Worcester publication). January 2001 edition.

Treasures at the Guildhall ((City of Worcester publication). April 2001 edition.

The Guildhall (City of Worcester publication).