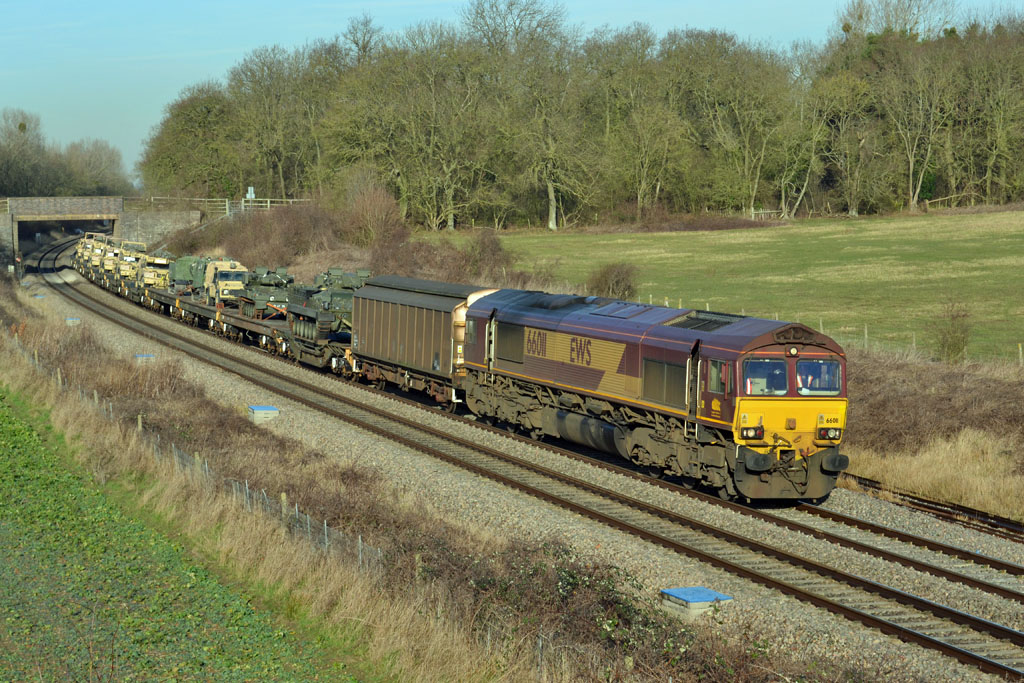 Taking advantage of the first day of bright weather in 2012, MIAC members gathered at Croome on Friday 13th January to photograph class 66 diesel locomotive No.66011 with the out of gauge (presumably because of the presence of a Warrior Armoured car at the front of the consist) Didcot to Ashchurch via Worcester MoD supplies train, headcode No.6X16. Photograph taken by Andrew Smith. 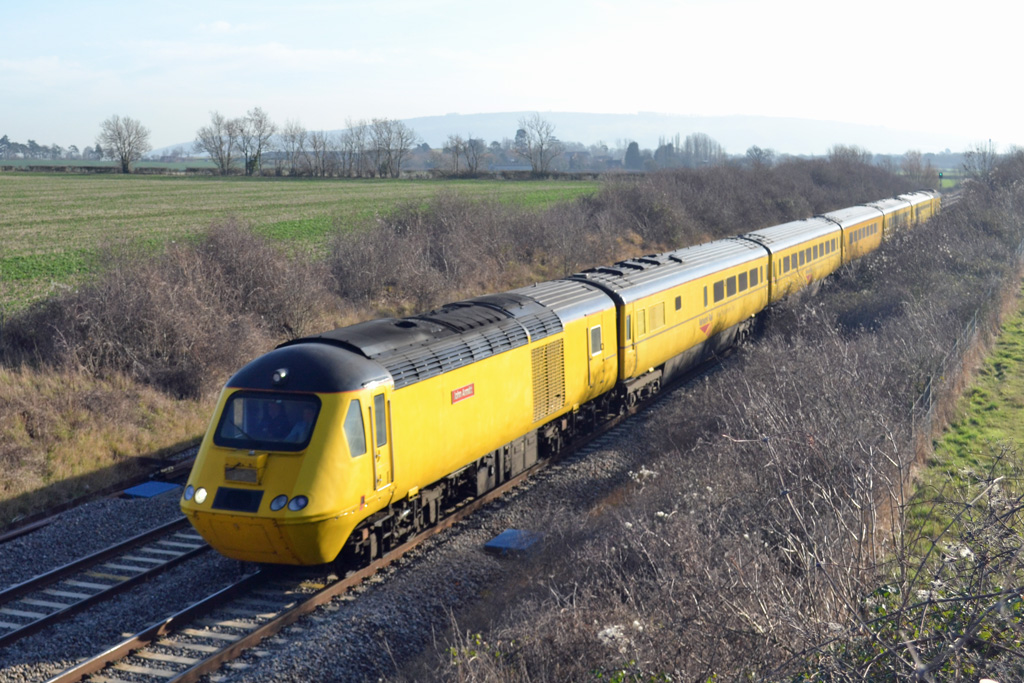 Network Rail's test train headed by class 43 locomotive No.43062 'John Armitt' with No.43013 at the rear head north through Croome, nicely lit by the weak winter sun. Photograph taken by Andrew Smith on 13th January 2012. 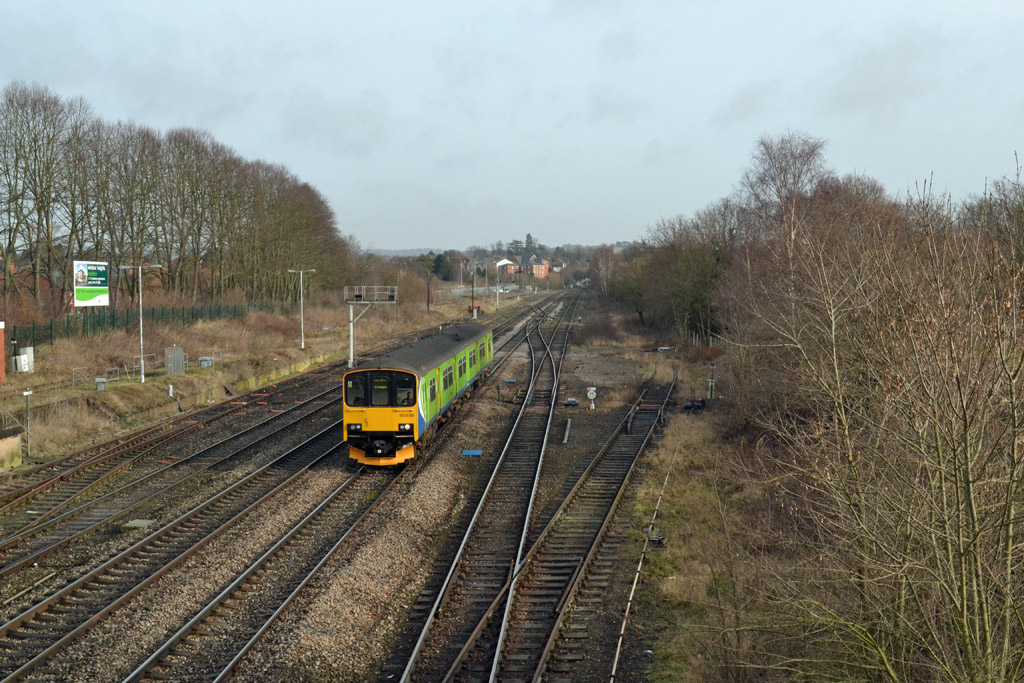 On Tuesday 14th February 2012 the 09:49 from Birmingham New Street to Hereford (headcode No.1V24) was formed of two-car class 150/0 diesel multiple unit No.150109. Andrew Smith photographed the unit at Bromsgrove whilst on an visit to observe a rumoured new regular working from Daventry to Wentloog freight train. Alas the freight train did not run. 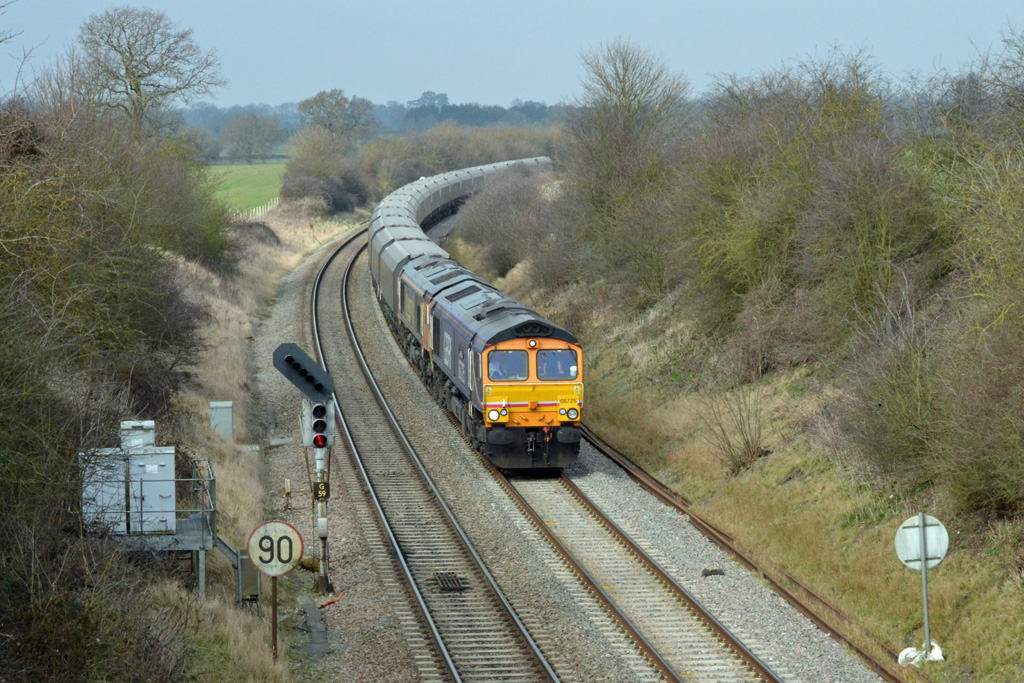 On 29th February 2012 class 66/7 diesel locomotives Nos.66725 and 66709 were in charge of the recently introduced biomass train from Doncaster to Portbury (headcode No.4V94). The train passed Abbotswood Junction at 13:33. Photograph taken by Andrew Smith. 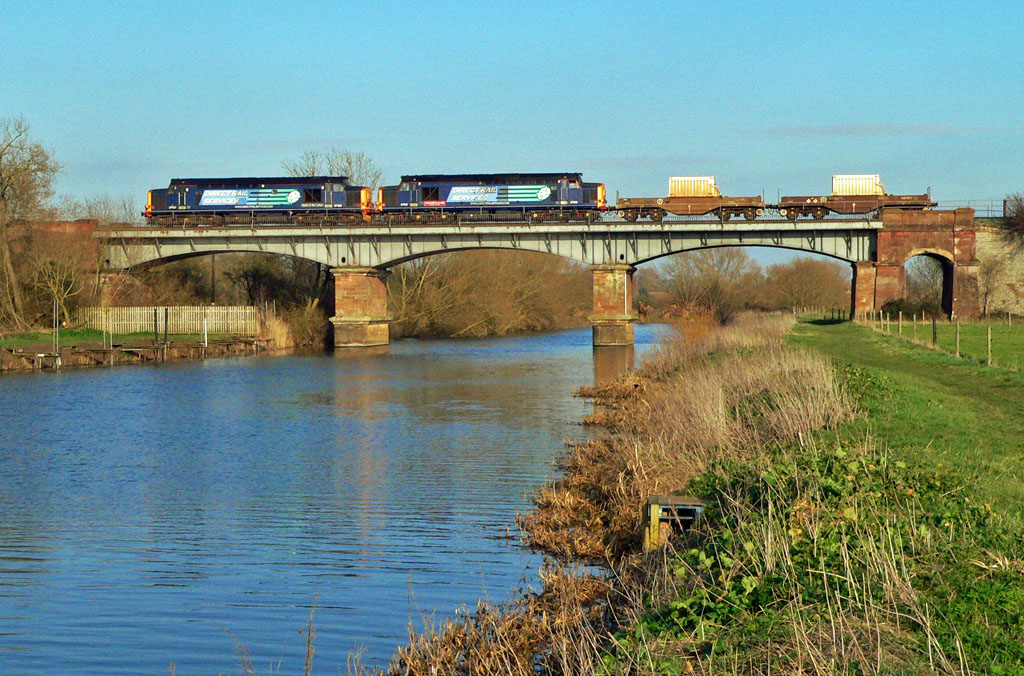 Also on 29th February 2012 Robert Cooke captured this magnificent study of the Bridgwater to Crewe nuclear flasks train as it crossed the River Avon bridge at Eckington. With the closure of the last reactor at Oldbury Power Station this working became the only scheduled flasks working in Worcestershire. However with 52,000 used fuel rods to recover from Oldbury there were also workings to Berkeley. The train is headed by DRS livery class 37 diesel locomotives Nos.37423 and 37610. 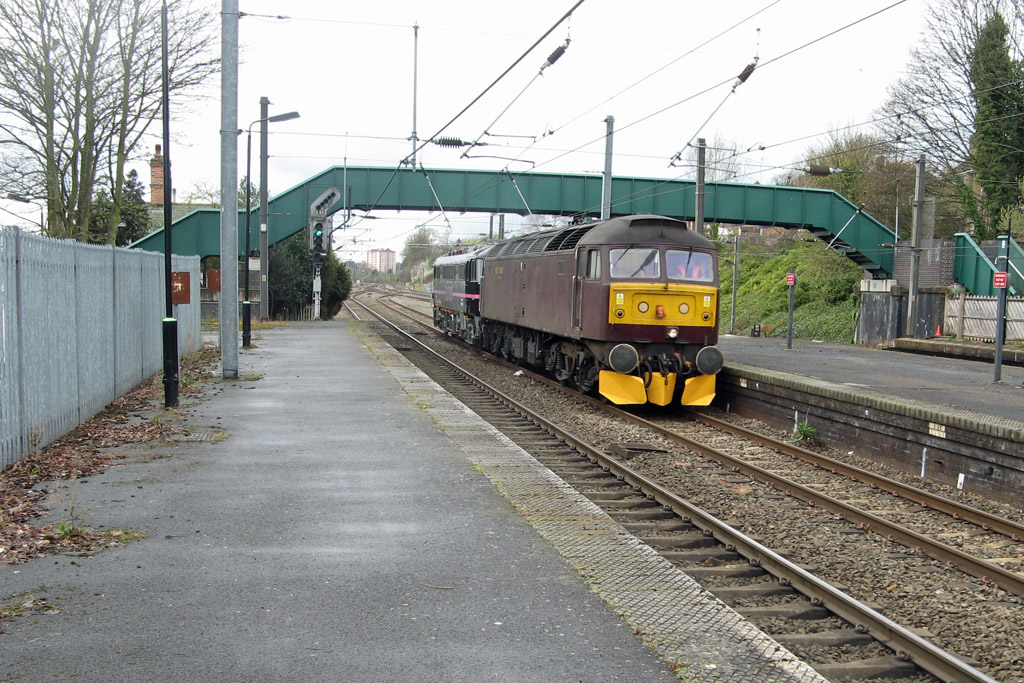 In less than ideal conditions for photography class 47 diesel locomotive No.47245 passed Kings Norton with train code No.0Z86 12:59 from Long Marston to Wembley. The train consisted of ex-BR class 86 electric locomotive No.86215 which following refurbishment and repainting in Floyd livery had been renumbered to No.450005 for export to Hungary. Photograph taken by Andrew Smith. 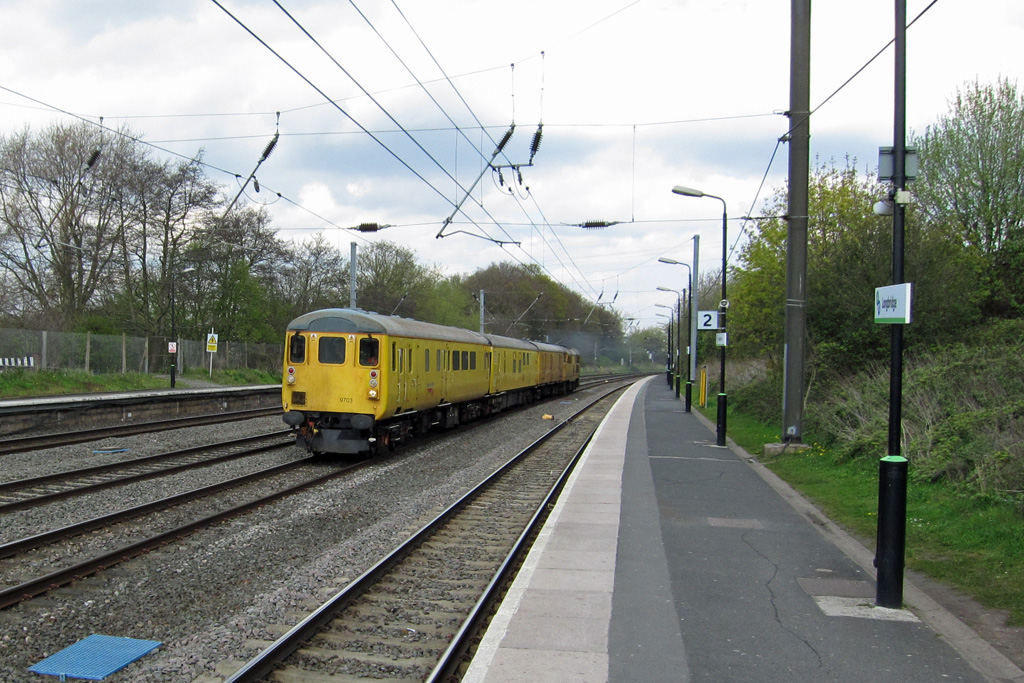 This interesting photograph shows a Derby to Bristol Network Rail test train (train code No.3Z37) passing Longbridge Station on 24th April 2012. The leading vehicle is Driving Trailer Coach No.9703 which was concerted by Serco from 1974 built Mark 2f DBSO carriage No.9527. The next vehicle in the consist is Ultrasonic Test Coach No.999602 which was built at York in 1974 (as No.S62483 for the Southern Region). This is followed by No.6263, a former Mark 1 BG built by Pressed Steel in 1957. Traction is being provided by class 31 diesel locomotive No.31285 at the rear of the train. Photograph taken by Andrew Smith. 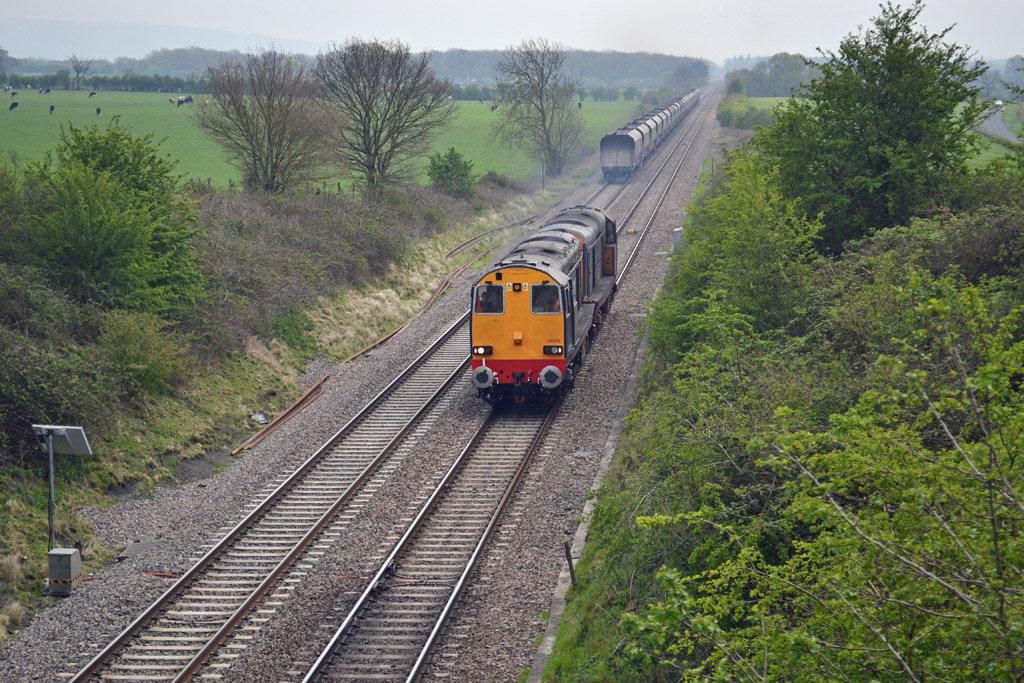 On Wednesday 2nd May 2012 the occasional Keyham Junction (Plymouth) to Crewe was operated by a pair of class 20 diesel locomotives. The westbound working conveyed two flasks which were left at the Naval Base at Devonport and the DRS livery locos (Nos.20312 and 20303) returned as 0Z40 light engines. The class 20s were photographed by Andrew Smith at Abbotswood shortly after Freightliner livery class 66 diesel locomotive No.66552 had passed with the afternoon Rugeley to Portbury train of empty coal hoppers. 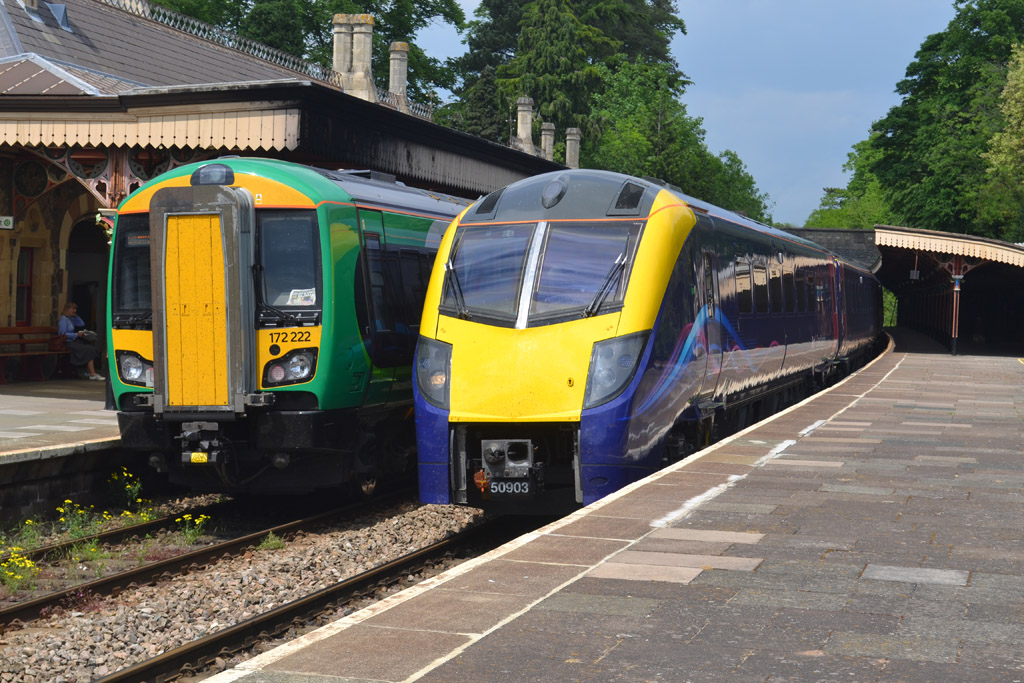 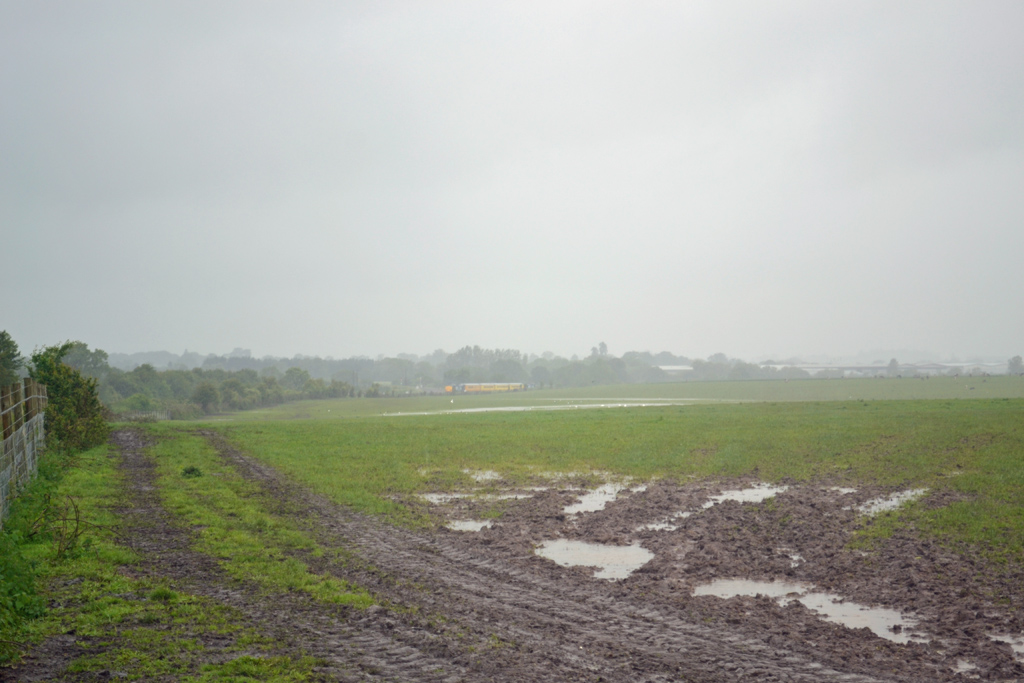 The flooded fields at Abbotswood bear testament to another washed out Saturday in June. Just visible in the background are class 37 diesel locomotives Nos.37603 and 37611 take the ex-BGR main line via Defford on their way to Derby with a network rail test train (headcode No.1Q13) from Exeter. Photographed in the driving rain by Andrew Smith on 16th June 2012. 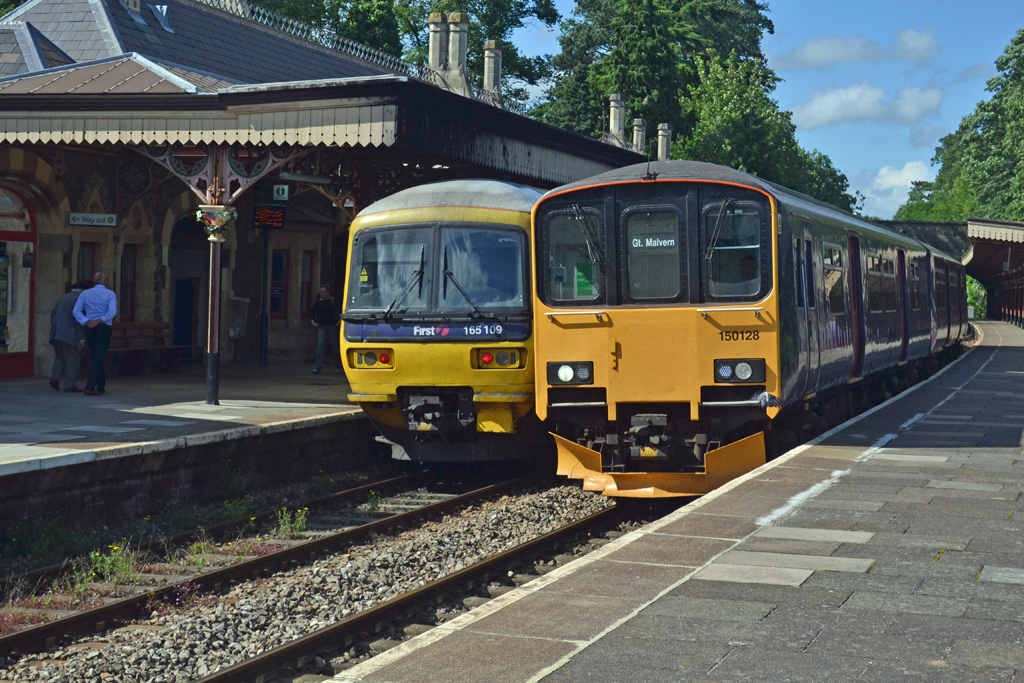 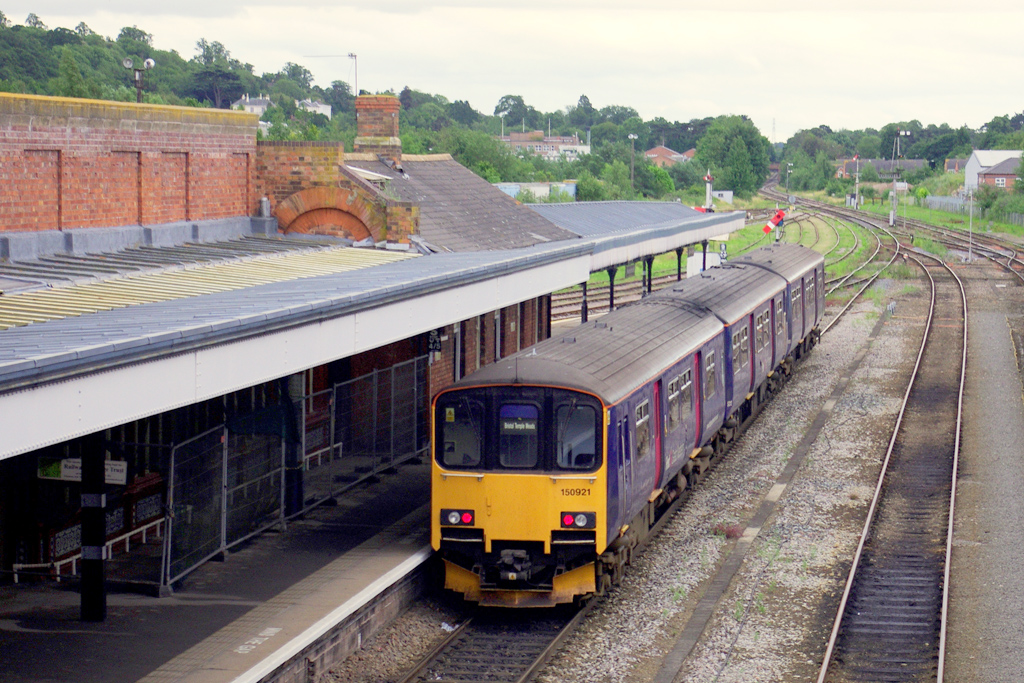 Pete Wilcox noted that First Great Western has added car No.57212 (one half of class 150/2 diesel multiple unit No.150212) to its recently acquired class 150/1 two-car unit No.150121 and re-numbered it to 150921. He photographed the new formation at Worcester Shrub Hill Station on 17th July 2012 with the 18:50 service from Great Malvern to Bristol Temple Meads (train code No.2T97). There is another photograph of this unit below. On 17th September the morning container train (code 4V38) from Daventry to Wentloog was headed by class 37 diesel locomotives Nos.37259 and 37607 instead of the usual class 66. Robert Cooke photographed the train at Spetchley.

On 17th September 2012, in a decidedly backward step that drew criticism from Centro, London Midland announced the ticket office at Lye is to close after which the station will be unmanned. 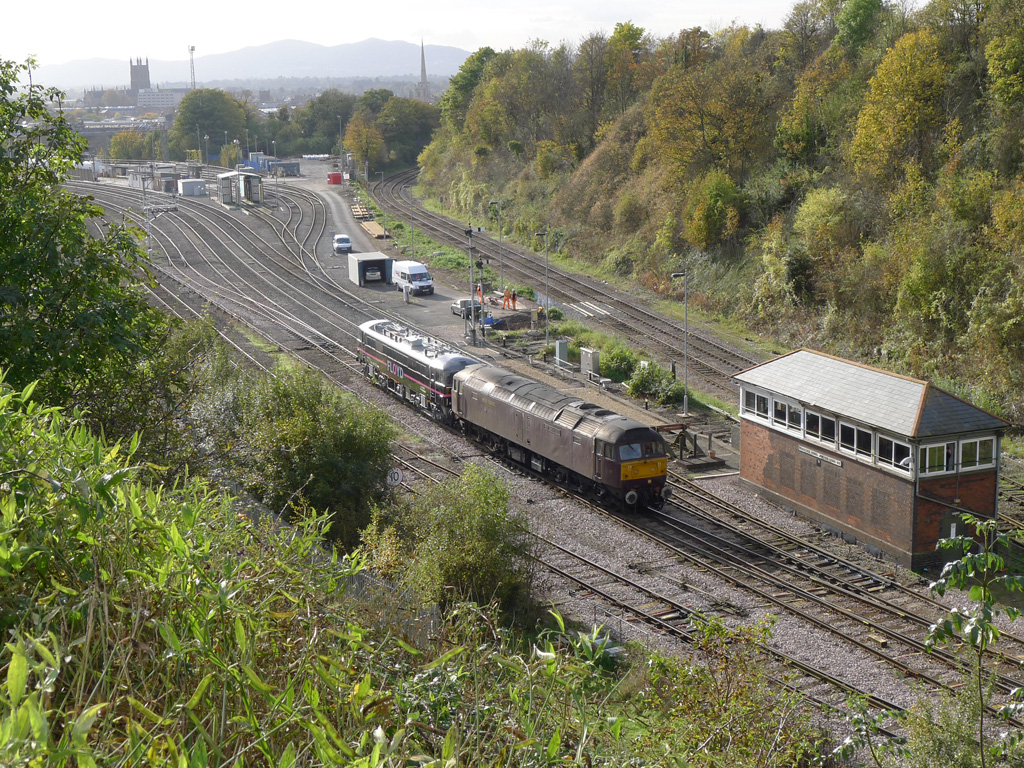 On Friday 26th October 2012 Robert Pritchard went to a favourite spot above Tunnel Junction signal box at Worcester and spent over two hours there. All passenger trains between 11.43 and 13.48 were Class 170 or Class 172 diesel multiple units except for class 153 single-car No.153364. Eventually West Coast Railway Co's class 47 diesel locomotive No,47786 appeared on the freight line with a gleaming electric locomotive in Floyd's black, pink and silver livery behind it. Formerly class 86 No.86217, it carried No.450.006 and has been fitted with a second pantograph.

Network Rail has advised that it intends to replace life-expired fencing along both sides of the Hereford and Worcester line between Worcester Road and Moorlands Road in Malvern. Sadly this is be the ugly chain-link style fencing, however the work will entail clearance of much lineside vegetation to possibly for a short while at least the two classic views at the spot will again be usable for photography. See the photographs of class 47 diesel locomotive No.47094 and class 35 'Hymek' diesel locomotive No.7026 to refresh the memory as to what used to be the scene. 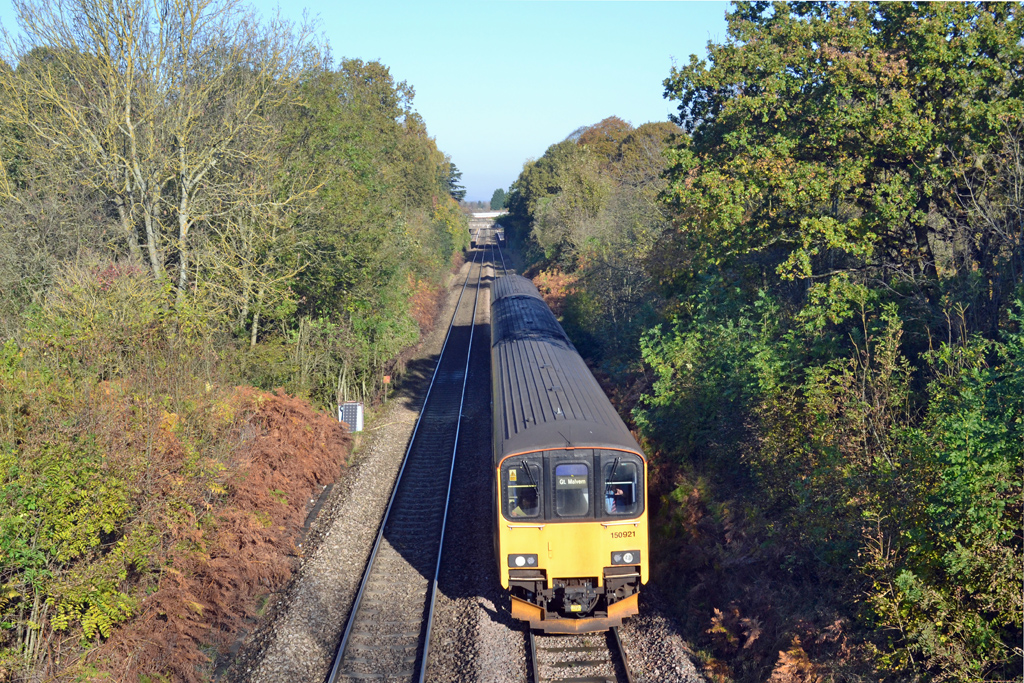 First Great Western livery three-car class 150 diesel multiple unit No.150921 at Malvern Common on 5th November 2012 before work had begun on replacing the lineside fencing. The train has just left Malvern Link Station, visible beyond the bridge, on the last leg of its journey to Great Malvern with train code 2E17 which had started from Warminster at 07:23. Re-discovering the somewhat neglected art of black and white photography. The storm clouds that were so much of feature of 2012 are not far away as class 172/2 two-car diesel multiple units Nos.172220 and 172212 gather speed after being slowed by the Newland East signalman whilst he was clearing a Worcester bound train. The units are working the 13:19 London Midland service from Whitlocks End to Great Malvern (train code 2V30). Photograph taken by Andrew Smith on 19th November 2012.