Prosser's scrap yard was located on the east bank of the River Severn just south of the City's road bridge between there and the Cathedral. It was a small business and normally contained only items of non railway interest.

However on 29th February 1972, Lyndon Knott, a member of the Worcester Locomotive Society, spotted a 2w-2PMR Wickham railcar in the yard. After ascertaining that the Ford 10hp petrol engine and the rest of the railcar was in working order he purchased it for preservation. It was moved to the WLS site at Moreton-on-Lugg on 3rd March 1972 and has subsequently moved with the rest of the Society's rolling stock to the Dart Valley Railway.

When acquired the locomotive was painted in BR's crimson and grey livery. It was built in 1953 (despatched to Exeter from Wickham's works on 15th May 1953) as part of a batch of sixteen (6641-6656) No.27 Mark III railway gang trollies for the Western Region. It was makers number 6646 and 'PWM3767', 'B6W' in the BR numbering scheme and worked in the West Country. When BR had no further use for it the railcar was offered for sale at Tiverton and found its way to Worcester. It was last reported as being at Tiverton on 31st May 1971.

The MIAC does not have a photograph of the Wickham at Prosser's yard (although we would be happy to replace this photograph with one at Worcester if any exist) so the best we can do by way of illustration is this photograph which shows MIAC member, Robert Pritchard, inspecting the railcar at Moreton-on-Lugg in the spring of 1972. 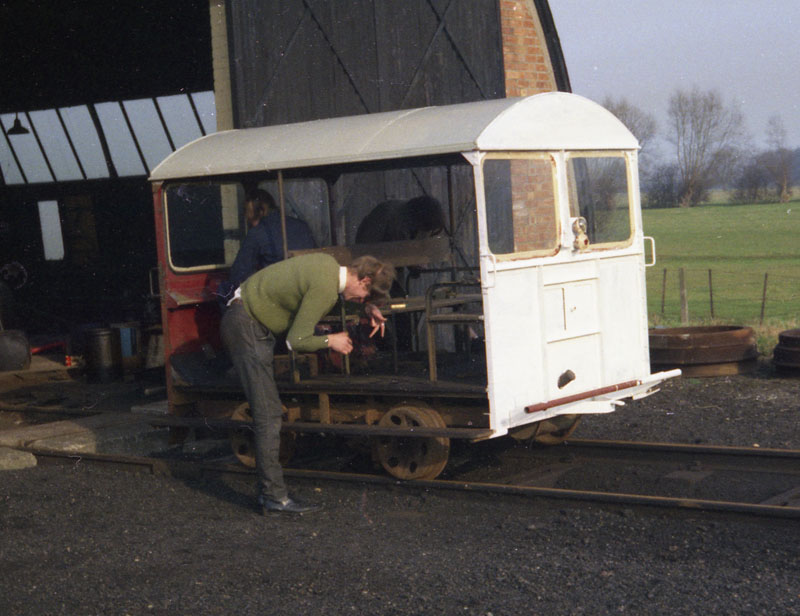 MIAC member, Robert Pritchard, examines the Wickham railcar in its then new home at Morton-on-Lugg on 2nd March 1973.