The MIAC is pleased to be able to publish a selection of photographs taken by Alan Bunting at Littleton & Badsey. You may download and keep these photographs for your own interest but please respect his copyright and do not publish them without his agreement.

This is Oxford based 'Castle' class locomotive No.5033 'Broughton Castle' passing under Mutton Bridge with a Paddington bound express train in December 1957. The locomotive was built at Swindon in 1935 and fitted with a double chimney in 1960. The engine was withdrawn in August 1962.

This is another photograph of the same train with No.5033 approaching the level crossing. Broughton Castle in at Banbury in Oxfordshire and is famous for featuring in the film 'Shakespeare in Love'.

This photograph shows an unidentified 2251 class 0-6-0 locomotive banking a train towards Honeybourne. 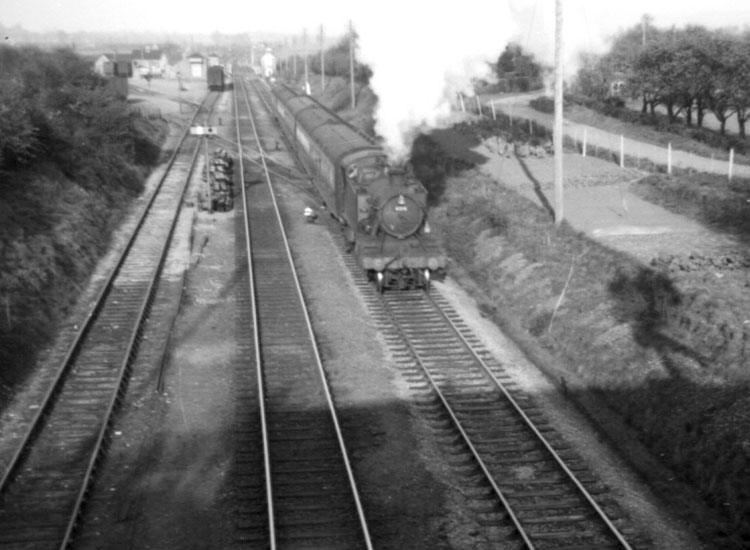 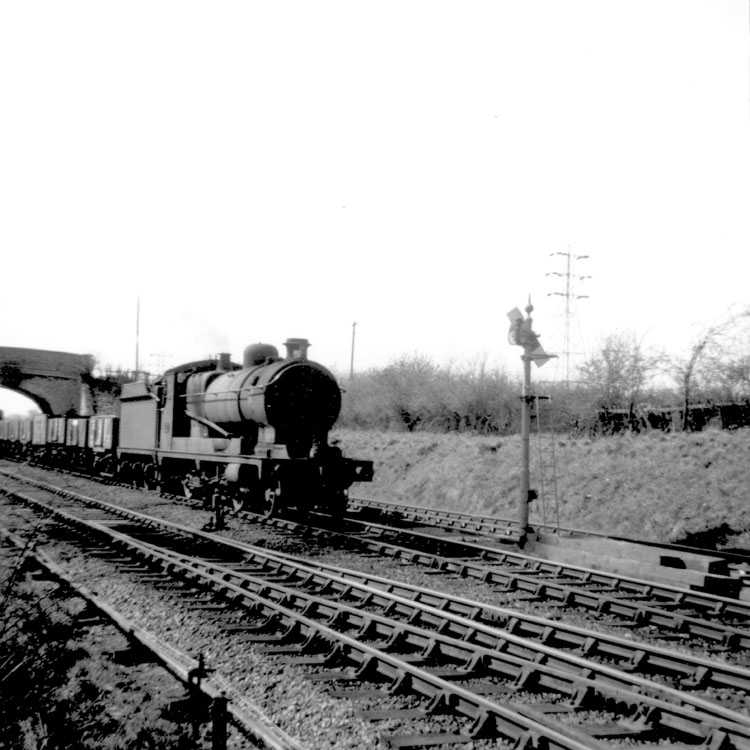 This is one of ROD class of 2-8-0 locomotives to a GCR design that the Great Western Railway bought between 1919 and 1925. Sounds of steam locomotives at Littleton & Badsey on 3rd September 1960.

Alan provides the following commentary to accompany the recording:

'For my 21st birthday I treated myself to a Fi-cord miniature tape recorder - an expensive but, by today's standards, very crude device which used 3" reels of 1/4" tape. It did though, run at 7.5 i.p.s. and, when used with the Grampian DP4 moving coil microphone I also purchased, produced very acceptable recordings.

After collecting the recorder from F H Alcock's music shop in Evesham, I eagerly started experimenting, recording everything in sight.

Across the road and up a bit from my parents' house at Blackminster lived Mr Smith, one of the signalmen at L & B and his housekeeper Doris Taplin who lived at the last house before Mutton Bridge (so called because of an accident there involving the death of some sheep). Their garden ran along the top of the embankment between the road and the railway almost up to the bridge and these recordings were made from that garden, just about opposite the slip which led into the headshunt. In fact just about the spot from where the ROD and the Hymek were photographed. Obviously the incidents on the CD are edited and didn't happen in real time but, so far as I can recall, the shunter was a 22xx 0-6-0 which left most of its train on the down line while shunting (just as in the picture). The main recording, with all the squealing flanges, is the sound of the loco backing its wagons from the 'down' line, across the 'up' line and into the yard. The diesel railcar which passes was probably No.W22 but I can't recall what the light engine was. I'm pretty sure it was on the 'up' line so it may well have been another 22xx on its way to banking duties at Honeybourne.

I spent many hours in L&B signal box with both Mr. Smith and Mr.Tutton, one of the other signalmen who also lived in Blackminster, and now regret that I never kept the recordings made there - but who, in those days, would have dreamt that such recordings made by a young and enthusiastic train spotter would be of interest to anyone over 40 years later?' This is a fascinating photograph showing an Auto- train approaching Littleton & Badsey from the Evesham direction. A freight heading through Littleton & Badsey towards Honeybourne. This photograph shows a new Up Home signal being installed.

More from the Alan Bunting Collection