The new Severn Valley Railway station at Kidderminster is completed in November 1985. 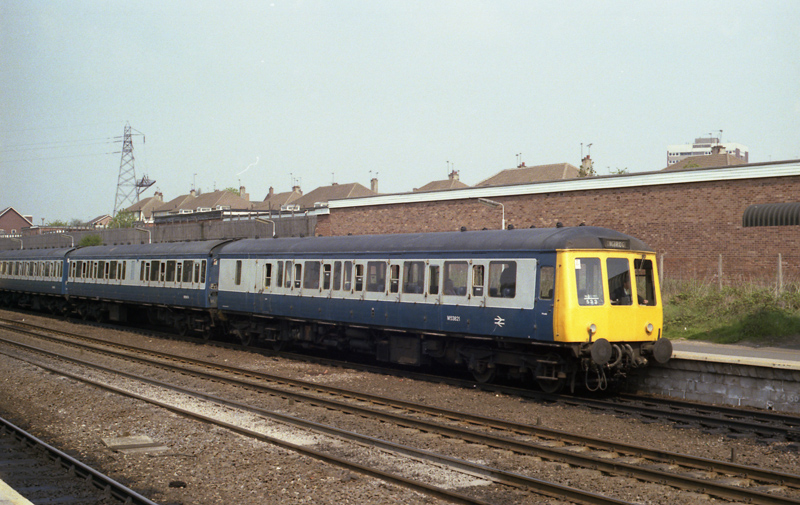 In May 1985 class 116 diesel multiple car No.53821 has arrived at Longbridge on a service from Lichfield and is waiting a path to cross over the main lines before returning north with another 'Cross City line' service. The original centre car has been replaced by No.59674, a composite carriage with lavatory in the centre, from a cast off class 115 diesel multiple unit. 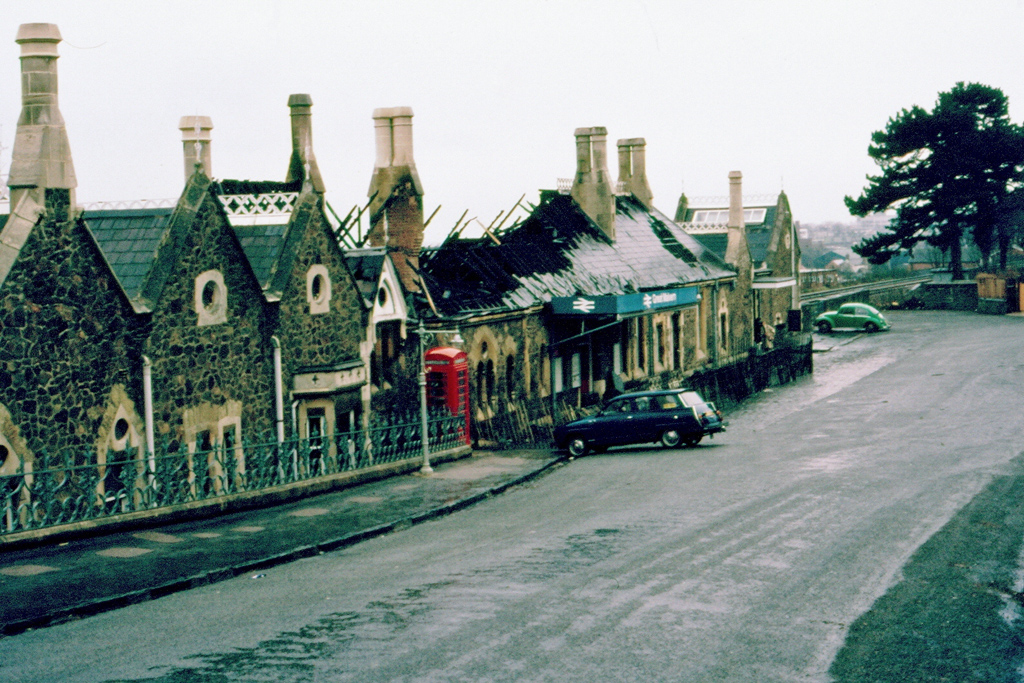 On 11th April 1986 the historic old station at Great Malvern was badly damaged by fire. Robert Cooks took this photograph showing the sorry state of the station after the fire had been extinguished. Fortunately money was available to allow for a full restoration and the building were reopened two years later. 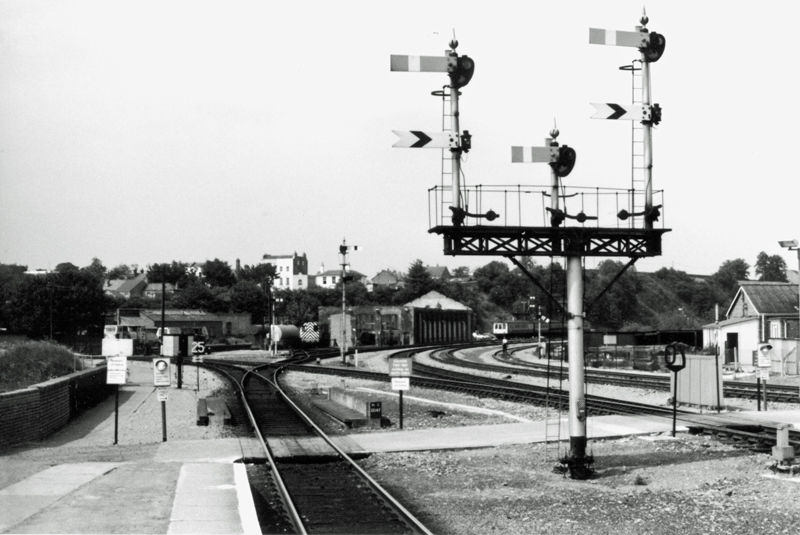 A gloomy day in July 1986 paints a picture of desolation and neglect over the Worcester Engine Sheds. The 'new' diesel depot (opened in 1966) has lost its roof and one of the apex end columns allowing the inside to be viewed. A solitary class 08 diesel shunter represents the only locomotive to be seen along with a permanent way machine in the space formerly occupied by the Goods engine shed and a diesel multiple unit.

1987 saw the launch of the BR INTERCITY livery with revised yellow panels and new style logos that did away with the well known 'InterCity 125' branding. The new livery worked well when matched with a similarly liveried set of stock as in this photograph of an HST at Vigo in 1991.

The much-loved Ruston ∧ Hornsby built diesel shunter No.PWM650, for so long a fixture at Newland PWD, was withdrawn from service in April. 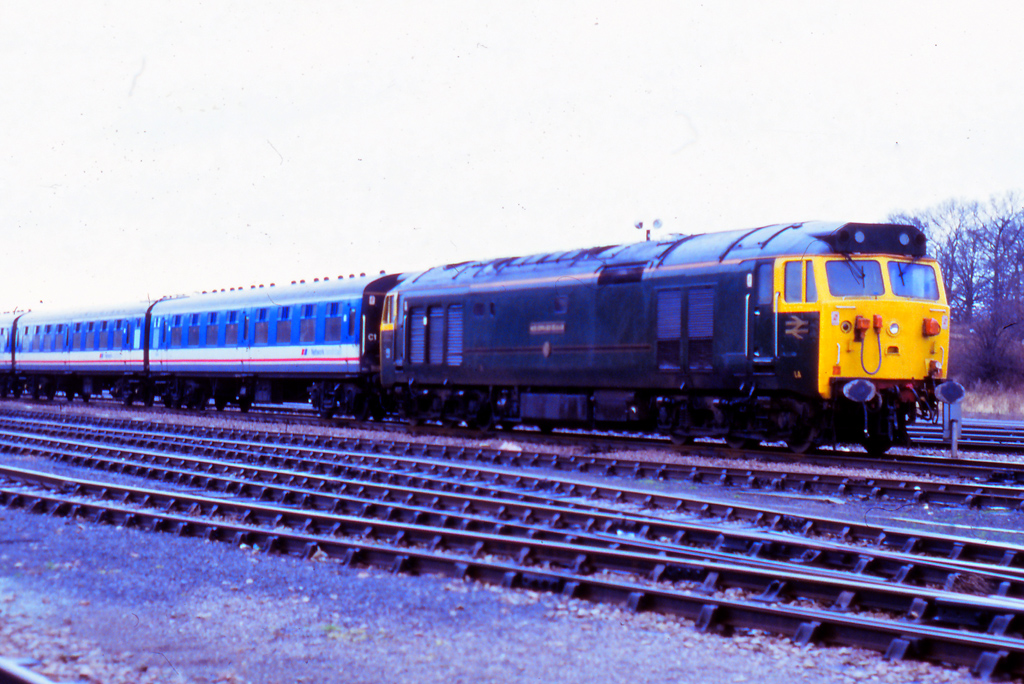 In the green livery used by the GWR class 50 diesel locomotive No.50007 'Sir Edward Elgar' was photographed by Pete Wilcox at Worcester Shrub Hill on 4th January 1987, with a rake of coaches in Network Southeast livery. 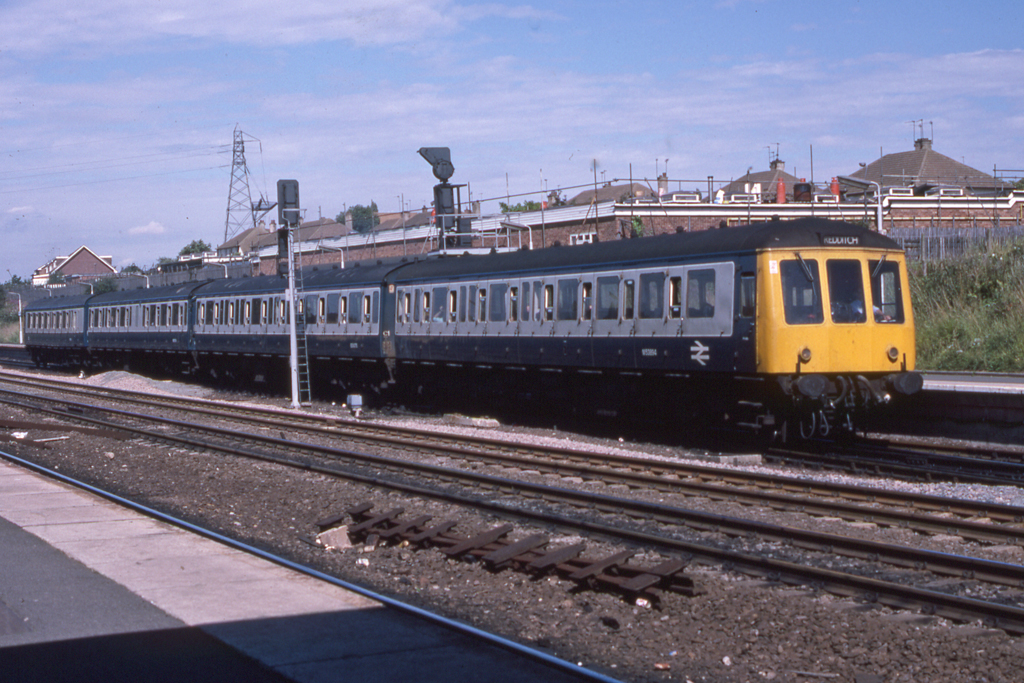 From the start of the May timetable changes the suburban class 116 diesel multiple units were re-formed into four-car sets by the use of cast-off class 115 power cars and a mixture of class 115, 116 and 127 centre cars cascaded from other London Midland Region depots. This had the advantage of increasing seating capacity and the more powerful engines in the class 115 power cars (400hp as compared to 300hp in a class 116) compensated for the weight of the extra carriage. One such set is seen at Longbridge in July 1987 with a service to Redditch. Class 116 power car No.53894 is leading the formation with class 116 car No.59375, class 127 car No.59600 and class 115 No.51860 at the rear. Photograph taken by Andrew Smith. 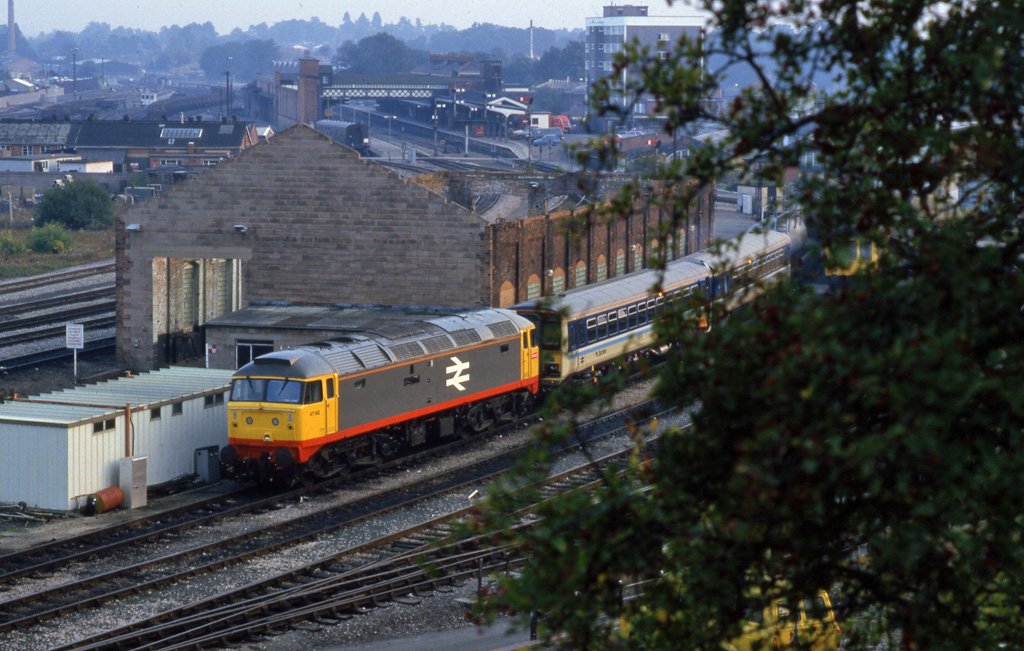 1987 saw the introduction of new class 155 two-car diesel multiple units, based at Cardiff Canton, to Birmingham to Hereford services. On 1st October 1987 class 155 diesel multiple unit No.155303 was stabled alongside the remains of the diesel shed at Worcester behind class 47 diesel locomotive No.47143 on the day before the locomotive visited the MoD base at Long Marston to be named 'The Sapper'. No.47143 is in the somewhat drab Railfreight livery which had been much improved by the addition of broad red stripe around the lower bodysides and across the bufferbeams. Photograph taken by Robert Pritchard.

On 2nd October 1987 Birmingham Snow Hill Station was re-opened for services to the south but it was to be 1994 before the station was reconnected to the line to Stourbridge and Worcester. 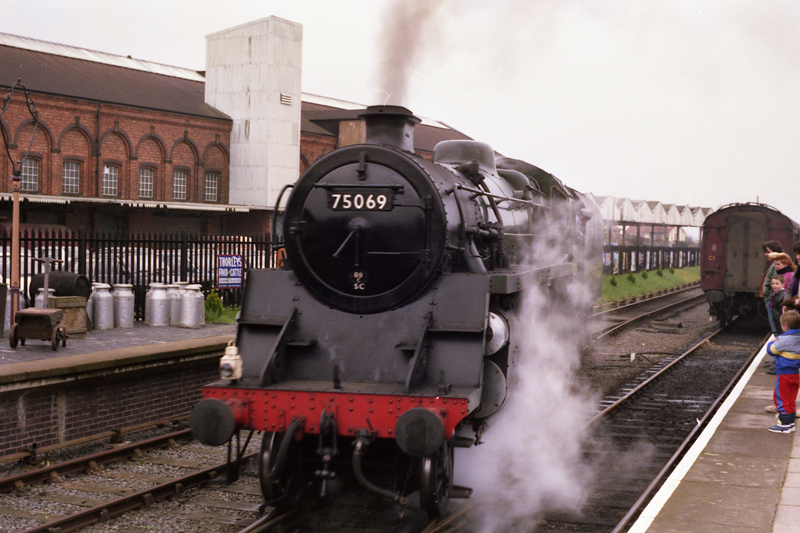 A clutch of children look on as ex-BR 'Standard' class No.75069 reverses alongside the 'Santa' special train that it has just returned to Kidderminster from visiting 'Santa's Grotto' at Arley on 5th December 1987.

BR announced that from May 1988 banking of trains over the Lickey Incline was to finish when the 21:24 Bristol to Glasgow/Edinburgh train was discontinued.

On 20th May 1988 Great Malvern Station is officially re-opened following rebuilding after the fire in April 1986.

For two weeks from 26th July 1988 trains on the Cotswold line to Oxford are disrupted whilst repairs are made to the tracks near Moreton-in-Marsh which were damaged by a landslip.

From 16th December 1988 the class 155 diesel multiple units are taken out of service following problems with door mechanisms and other problems. When they returned to Worcestershire it was following rebuilding as single-car class 153 railcars. 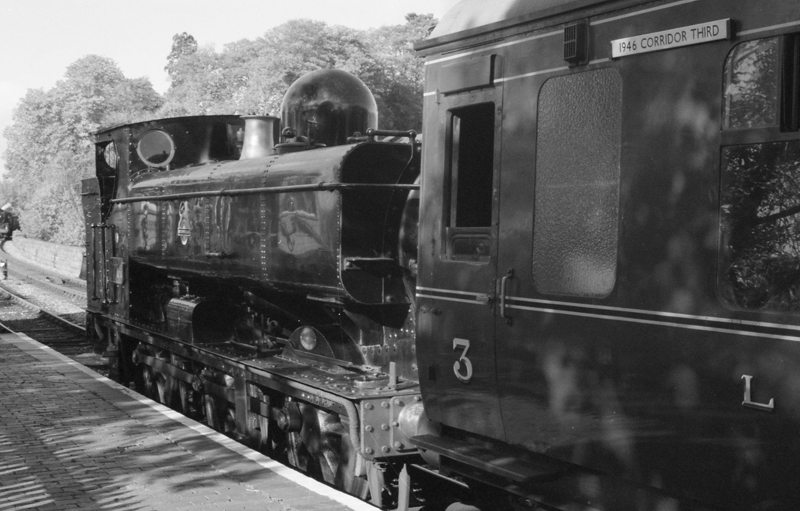 Ex-BR 0-6-0 Pannier Tank No.7714 has charge of a service to Bridgnorth on the Severn Valley Railway and was photographed at Bewdley on 25th October 1988.

On 14th May, after a reign of twelve years, the last class 50 duty on Hereford and Worcester to Paddington services reverts to class 47 haulage. This photograph neatly illustrates the perils of changing liveries, in this case from BR blue livery to the InterCity Executive livery. Class 43 'HST' power cars No.43017 (leading) and 43189 (rear) plus one of the seven carriages are in the new livery whilst the others are in the old livery. Pete Wilcox took this photograph at Bredicot on a sunny 27th May 1989. 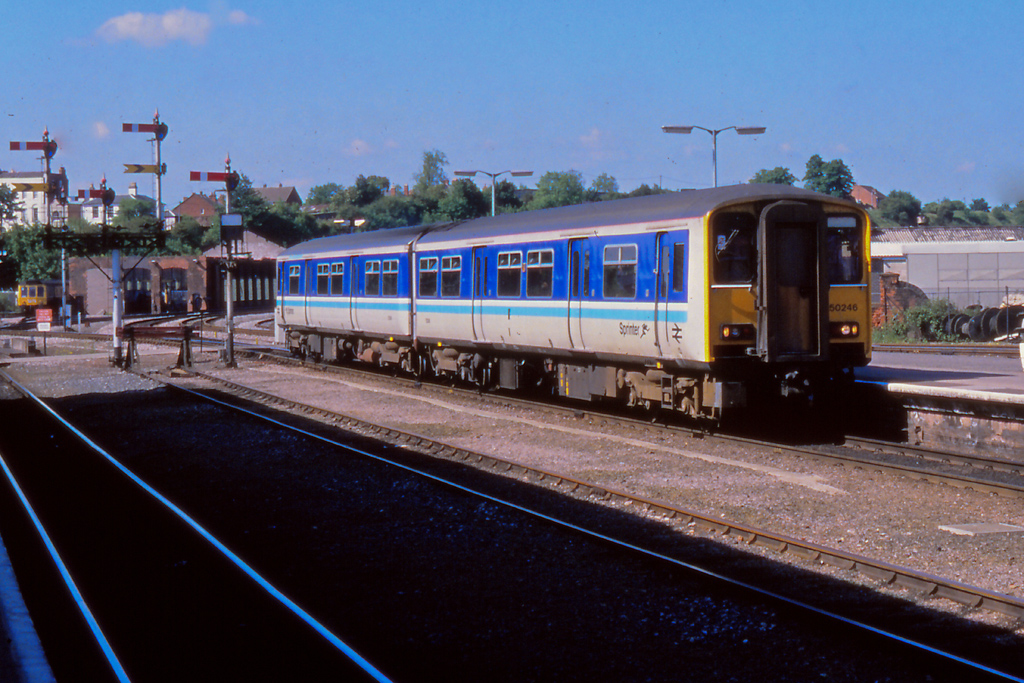 Also on 27th May 1989 Pete Wilcox took this photograph of Cardiff Canton based class 150/2 two-car diesel multiple unit No.150246 entering Worcester Shrub Hill Station. The remains of the former Diesel Depot are visible in the background together with a class 116 diesel multiple unit adorned with a “WM” logo on the front end. 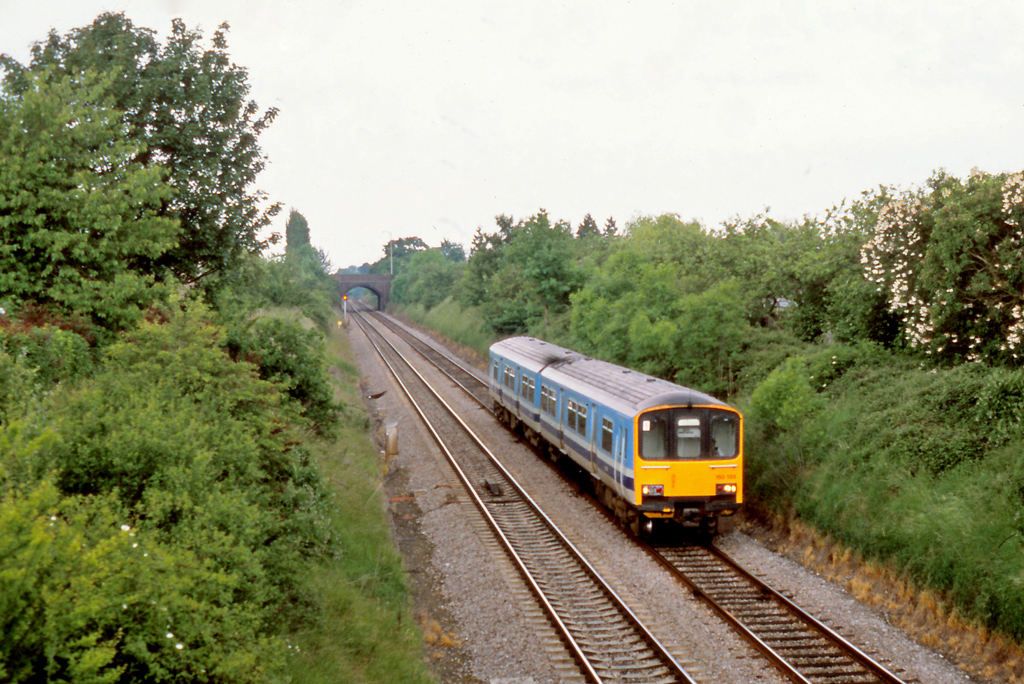