We are pleased to be able to reproduce some photographs taken at Worcester in the 1960s from the photograph collection of fireman Brian Parsons. Please respect his copyright in these photographs. 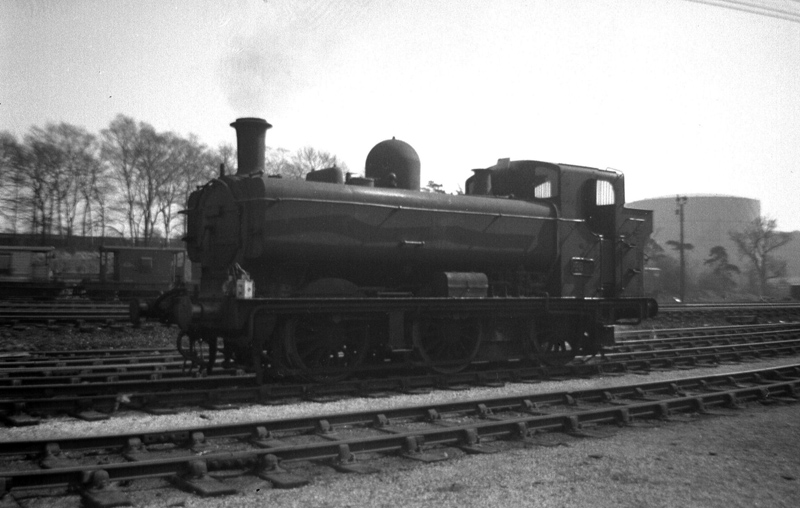 Brian states that he was on his own on the footplate when he took this photograph at Wyldes Lane. Having dropped off the van in the loop, the locomotive was returning across the main line to Midland Yard. No.4664 was one of the ubiquitous "5700" class of 0-6-0 Pannier Tank. It spent its entire working life in the area being withdrawn in July 1965. 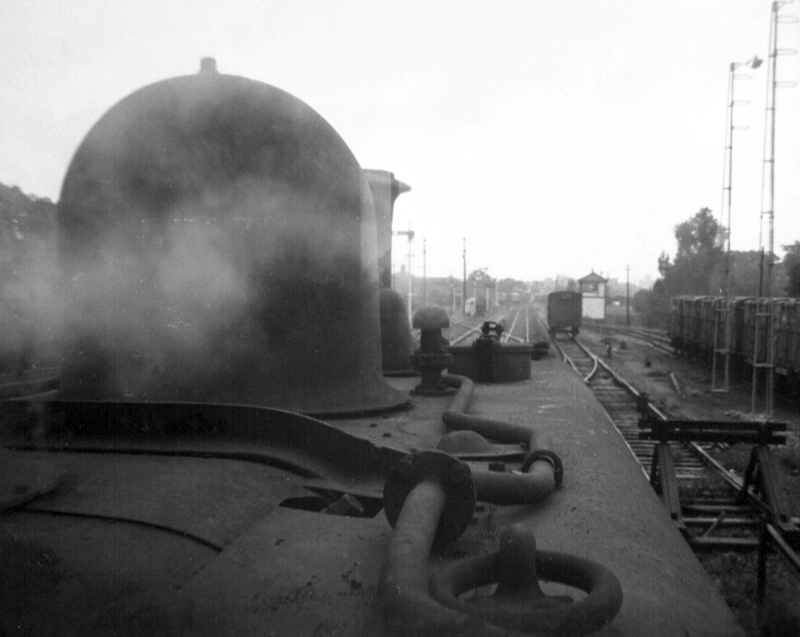 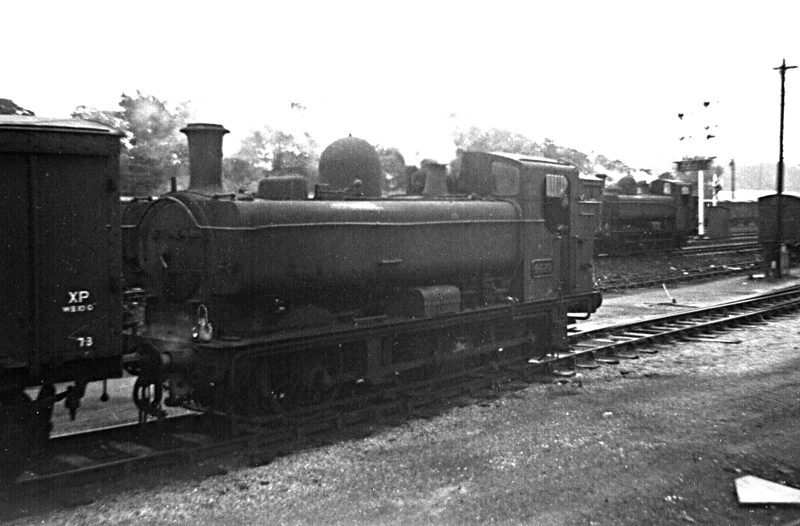 These two photos of ex-GWR "5700" class 0-6-0 Pannier Tank No.4680 were taken on 16th September 1965. Brian's diary entry for that day shows that he booked on duty at 05.25 and also notes that he spent three hours driving. Although, obviously, strictly against the rules it was common practice, when on these shunting duties, for some drivers a very small minority) to leave their fireman to carry on alone whilst they spent time elsewhere. He was only seventeen and really keen, so that arrangement suited me fine, but when I look back it seems remarkable. No.4680 was one of the last steam locomotives used at Worcester and was not withdrawn until the end of December 1965. 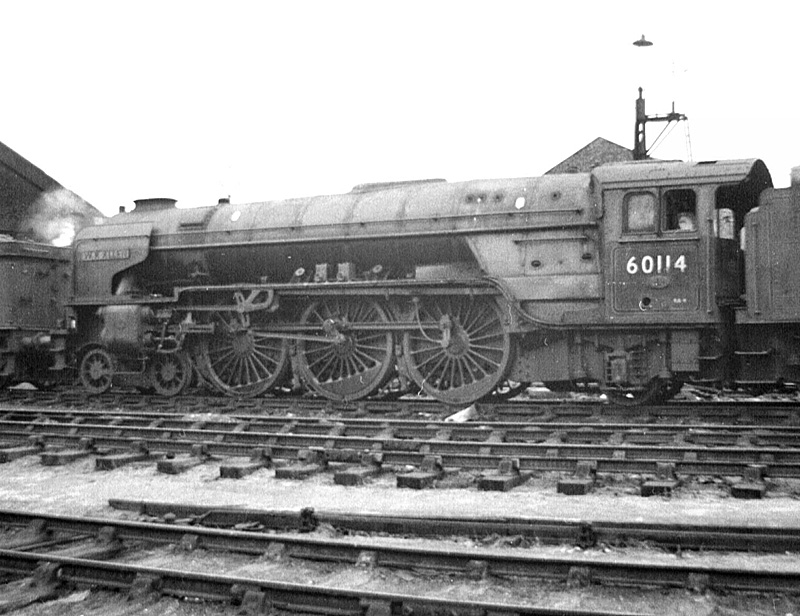 This fine photograph shows ex-LNER 'A1' 4-6-2 on Worcester shed on 29th June 1964 whilst awaiting repair following a shunting incident at Worcester. Note that one of the connecting rods has been removed. There are many other photos of No.60114 at Worcester - see the locomotive index. 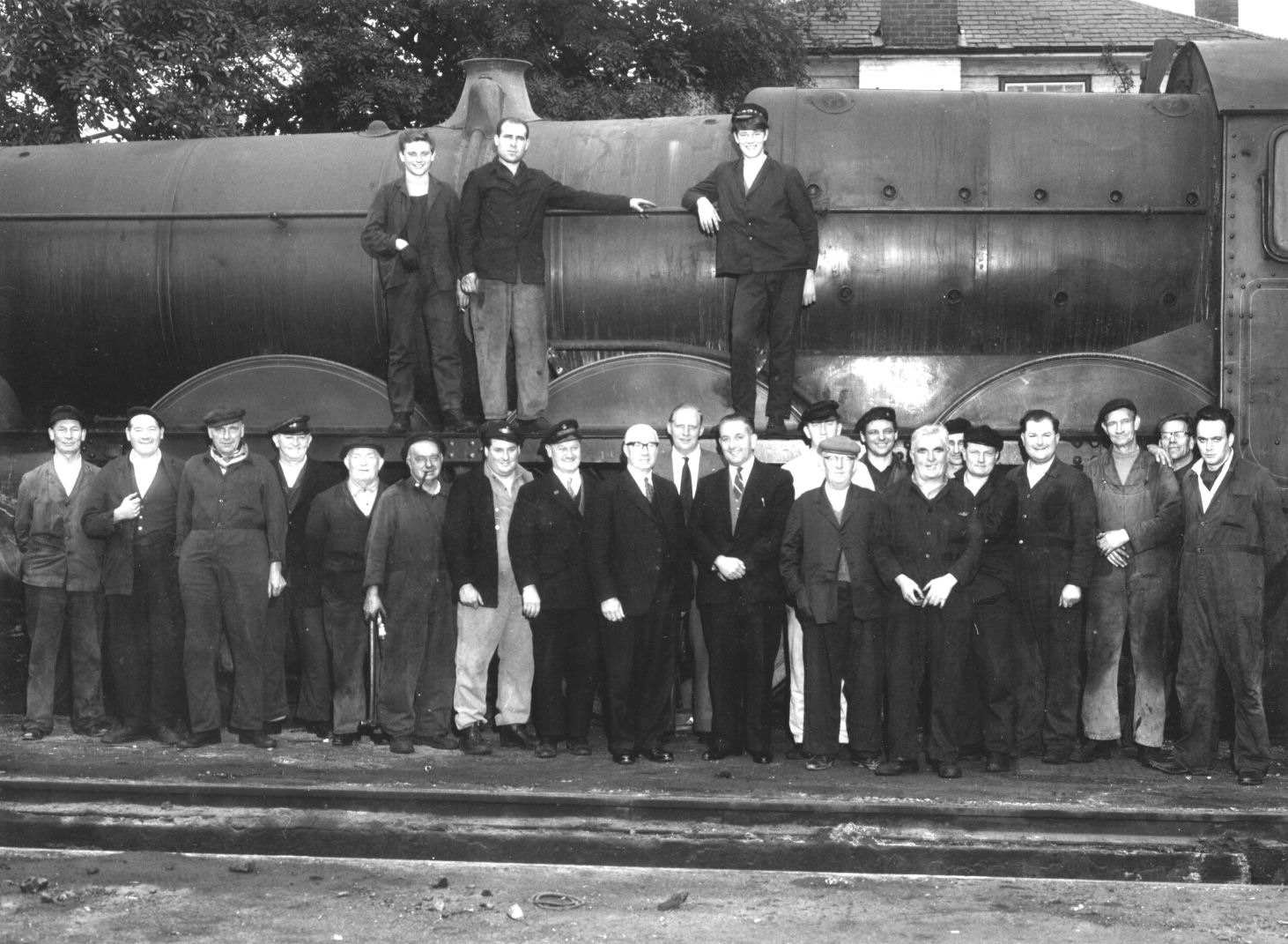 This photo shows what is believed to be the following Worcester shed staff (all from left to right):

The eight men on the left of the men in ties include: Cyril Price; Mr Berry, Platelayer, Mick Hinton; Bill Robbins (whose son, Harold, was one of the Firemen on the two 'Halls' used on the 1957 Royal Train notes; Charlie Lane; Frank Walters (loco fitter) who was a real character who could sit and tell tales all day about how he kept the railway running; Ken Alford (shed supervisor) who was on permanent shed duties to ill health and Archie Davies.

The three men in suits and ties are: Noel Higgins (shed foreman), a gentleman of the old school who always wore a smart three piece suit and highly polished shoes; Fred Bennett (shed foreman), who came from a 'railway family' and who had a brother who was manager of the fitting shop; Fred A .Cole (shedmaster), who took over from Mr Cureton in 1963.

This image shows a lot of shed staff standing in front of what appears to be a 'Castle' class 4-6-0 locomotive outside the back of the Goods Engine shed at Worcester.

Brian Parsons who kindly provided the photograph for use on this site provides the following information:

I wondered if you would be interested in this photo of staff at Worcester shed. It was taken in October 1964 by a Rail News reporter who was doing a feature on the depot.

Can anyone put more names to faces?

Robert Pritchard asserts that he believes the locomotive to be No.7005 'Sir Edward Elgar' but Chris Harris suggests possibly No.7002 'Devizes Castle' as he recalls seeing in in this position after withdrawal. He comments that: 'No.7002 was originally due for withdrawal at the start of the summer time table and pre-sold to Cashmores of Great Bridge. However, owing to the unreliability of the Hymeks it was hired from the scrap man, together with several of her sisters at a reputed cost of £100 per week, for the rest of the summer service. It was at the end of this stay of execution that the loco was placed at the rear of the goods shed before departing for ever'. MIAC member Roger Lamb comments that he has heard this story about locos being hired from Cashmore's in 1964 previously but can provide no definitive evidence of which locos were hired nor for what period of time. Andrew Smith notes that the 'Railway Observer' gives a withdrawal date of 3/1964 for No.7002 and a sale to Cashmore's is recorded in June 1964.

A further note in the 'Railway Observer states that on 6/10/64 (just before this photograph was taken) Nos.5000, 5054, 7005 and 7025 were out of use at Worcester with all nameplates removed. No.5000 can probably be ruled out as it was always in appalling external condition in 1964 and in any event a photo of it on Worcester shed in November 1964 has it the other way round to the loco in the photo (Andrew Smith).

It might help identity if anyone can provide details or sightings of any duties the Worcester 'Castles' had between the last recorded use of No.5054 on a railtour on 12/7/1964 and withdrawal at the end of the summer timetable please?

Thanks to Brian Parsons for the photo; Mick Rock and Chris Higgins for identification and additional notes.


A WORCESTER ENGINEMAN by Brian Parsons 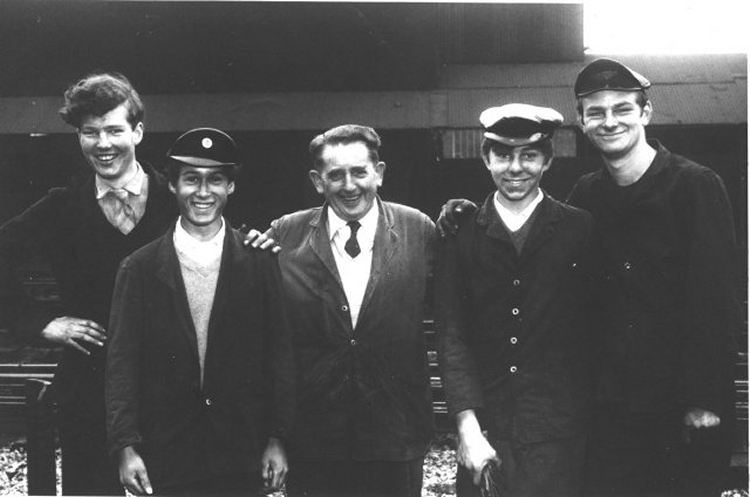 Unfortunately my memories of steam at Worcester are somewhat faded now. I started as an engine cleaner in August 1964, then was promoted to fireman at the end of that year. As you probably know, promotion was not on merit, but on seniority. I was just lucky that there was a shortage of firemen at the time I started.

The photo above was taken in October 1964, and was published in Rail News, the BR staff magazine. From L-R Chris Smith, Alan Collins, Fred Jones (in charge of the cleaners), Myself and (I'm not sure of the person on the right, but I think his surname was Hemming)

It is the only photo I have of myself at Worcester. I have one or two which I took from the footplate of the Shrub Hill pilot, but they are of poor quality. I also have a large group photo, taken on the same day as the one of the cleaners, which features about thirty or more of the shed staff, and was, possibly, also published.

As for anecdotes, I shall have to give this some thought. My memory is not good at the best of times, and this was cracking on for forty years ago. But what I must do, is get into my loft, and gather together all my notes which I made at the time, to see if they can jog my memory. My strongest memory is of working on the Shrub Hill station pilot, usually a pannier tank. 4680 and 3682 were two which come to mind. Incidentally the station pilot was known as the 'Joint Shunter'. I'm only guessing, but I've thought since that that was a reference to the fact that Shrub Hill may once have been a joint station, GWR and Midland. My biggest regret was not writing down, at the time, some of the tales which were told in the engine mens' cabin (mess room). I think the hours of sitting about waiting for trains developed their story telling skills, but, unfortunately, as I say, my memory isn't up to the job.

I can't actually recall the last day of steam, maybe I was not on duty. For a lot of the staff, the withdrawal of steam was a blessing, as it was hard and dirty work. But for me, young and keen, it was a sad disappointment. I continued to work on the foot plate, on diesels, right up to 1973, at which time I took voluntary redundancy.

Once again I'm not sure, but I assume steam engines stayed at Honeybourne for banking right up until the last day of steam. My friend Chris (in the photo) transferred there (against advice) and was made redundant when steam was withdrawn.

I hope this helps, and if I can think of anything else which may be of use I'll let you know.